These results come from a July 13-17 Gallup poll conducted just before the convention. Ryan, who has endorsed Trump but kept him at arm's length, skipped key party convention votes on Monday but will address the convention Tuesday. His speech is expected to be one rooted in his party's favored policies -- including ones at odds with Trump's.

Both Cruz and Christie, Trump's rivals in the 2016 Republican primaries, will speak at the convention. Cruz's image has recovered quickly among the party base in recent months. At the time he suspended his campaign in early May, Republicans viewed him as negatively as they did positively. Today, they are almost twice as likely to view him favorably as unfavorably. Christie's favorable rating hasn't moved among Republicans since he ended his campaign in February. About half of Republicans had a favorable view of him then, similar to the rating he has now after spending months campaigning for Trump.

One notable Republican leader who is not attending the convention is 2012 GOP presidential nominee Mitt Romney, a vocal critic of Trump throughout the nomination process. The former Massachusetts governor's attempts to influence the outcome have not endeared him to the party, as Republicans now view him about as negatively (46%) as they do positively (44%). That is a far cry from September 2012, when about nine in 10 Republicans had a favorable view of Romney.

Like Romney, former President George W. Bush is a notable no-show at the convention. Republicans still view him favorably overall, and his 52% favorable rating among national adults is further evidence that his image is recovering from the 34% he finished his presidency with. Still, Americans continue to assign Bush more responsibility for current economic problems than they do President Barack Obama. Americans generally view former presidents more charitably than current presidents, even those like Bush who left office with low public support.

Ryan's Favorable Rating Among Republicans Back Above 70% Still, Ryan retains high positive ratings among party loyalists after roughly nine months in the speakership. That stands in stark contrast to former Speaker John Boehner's ratings after he announced his resignation last fall, as well as ratings of current Senate Majority Leader Mitch McConnell in Gallup's last measurement of him in October.

Many in his party have long respected Speaker Ryan as a unifying figure who can overcome steep political challenges. Rank-and-file Republicans hold him in high esteem. The 2016 presidential election is yet another challenge for Ryan, as he seeks to keep his party together after a divisive campaign season that rocked his party's establishment. Though he doesn't always refrain from criticizing Trump, Ryan has endorsed him.

With many key GOP figures skipping the convention this year, Ryan could play a critical role in uniting his party -- not only for the general election, but also for the Republican majorities in Congress he seeks to maintain. 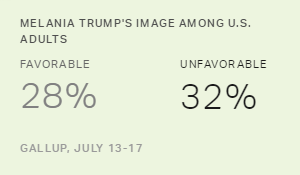 Melania Trump's pre-convention favorable rating is the worst of any potential first lady Gallup has measured since 1992, mainly because Democrats tilt strongly against her. Republicans are more positive, though many can't rate her. 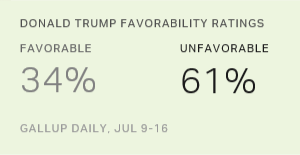