WASHINGTON, D.C. -- U.S. parents' concern for their children's physical safety at school has held steady this year at 28%. Parents' fears most recently edged up to 33% in 2012 and 2013 after the mass shooting in Newtown, Connecticut, in December 2012. Since then, the percentage of parents who fear for their children's safety has returned to the levels seen from 2009 to mid-2012. Gallup's 18-year trend documents spikes in parents' concern about school safety after major incidents of gun violence at schools, including the April 1999 Columbine massacre (55%) and the March 2001 shooting at Santana High (45%), and an uptick after the December 2012 Newtown shooting (33%).

Despite the racial and income differences, concern among parents whose children attend public versus private schools does not differ significantly. However, parents of elementary and middle school students are slightly more likely than parents of high school students to be concerned about their children's safety at school.

Roughly One in Eight Students Express Fear for Their Own Safety

Currently, 13% of parents say their children have expressed fear about their safety at school. This is the highest level of fear recorded since 2001, when 22% of parents said their child indicated concern shortly after the Santana High School shooting. However, the current figure is largely consistent with the 8% to 12% range seen since 2012. According to the FBI, there have been as many as 50 mass murders or attempted mass murders in U.S. schools since the Columbine shooting. Parents' muted response to high-visibility school shootings in recent years could reflect an increasing desensitization to school violence.

Results for this Gallup poll are based on telephone interviews conducted Aug. 3-7, 2016, with a random sample of 254 parents of children in grades kindergarten through 12, aged 18 and older, living in all 50 U.S. states and the District of Columbia. For results based on the total sample of national adults, the margin of sampling error is ±8 percentage points at the 95% confidence level. All reported margins of sampling error include computed design effects for weighting. 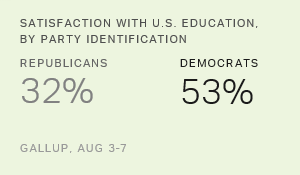 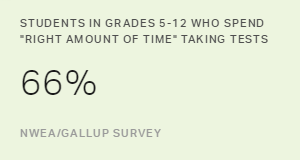 The amount of time U.S. students spend taking tests is a much greater concern for educators than it is for students. While administrators are still understanding the law that will replace No Child Left Behind, most are neutral or positive about it. 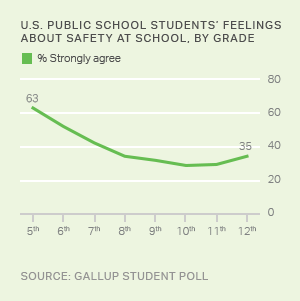