This is the third article in a five-part series examining changes in Americans' health and well-being during Barack Obama's presidency.

WASHINGTON, D.C. -- Americans' exercise and smoking habits have improved while their eating habits have worsened slightly over the nearly eight years of Barack Obama's presidency. These findings are based on interviews conducted daily from January 2008 through July 2016 as part of the Gallup-Healthways Well-Being Index.

So far in 2016, 64.2% of U.S. adults report that they ate healthy all day yesterday, which is on the lower end of what Gallup and Healthways have recorded since beginning to track this metric in 2008. The percentage of Americans who said they ate healthy peaked at 67.7% in 2010, but generally declined through 2013 and has remained steady since. While Americans' reports of healthy eating have declined slightly over the past eight years, the percentage who consume produce frequently has generally held steady. To measure produce consumption, Gallup and Healthways ask Americans to report on how many days they consumed five or more servings of fruits and vegetables in the past seven days. One possible explanation for the slight decline in healthy eating while frequent produce consumption has remained steady is that more U.S. adults may be aware of the nutritional content of their food and drink. During his tenure, President Obama has made some strides in shedding light on proper nutrition. Some restaurants and vending machine owners have voluntarily posted nutrition information ahead of an FDA regulation requiring large restaurant chains and vending machine operators to list calorie information. And in May, the U.S. Food and Drug Administration approved new nutrition labels for the first time in more than 20 years. The updated labels include a new design, up-to-date nutritional science and different standards for serving size. The updated labeling is significant as Gallup previously found that 68% of Americans pay attention to nutrition labels either a great deal or a fair amount on food packages, more than the percentage who say the same about restaurant menus (43%).

The percentage of Americans who report exercising regularly has edged up in 2016 to 53.8%, and from a longer-term perspective, has increased 2.4 percentage points since 2008. To assess exercise habits, U.S. adults are asked to report on how many days in the past week they exercised for at least 30 minutes. But the quality of Americans' exercise may still be falling short of what is needed to achieve the maximum health benefits. According to the CDC, just 21% of U.S. adults are meeting the physical activity guidelines for both muscle-strengthening and aerobic activity.

While Americans' exercise habits have improved slightly, their smoking habits have improved significantly, with the smoking rate dropping three points since 2009. The percentage of U.S. adults who smoke has declined nearly every year during Obama's two terms, a continuing trend that began long before Obama took office. The smoking rate among U.S. adults is now 18.0%, down from 21.0% in 2009. Across age groups, the smoking rate has declined the most among young adults -- those aged 18-29 -- during Obama's years in office. Young adults had the highest smoking rate in the early 2000s, but their smoking rate is now closer to the national average. The percentage of U.S. adults who smoke varies widely by state, with residents of southern and Midwestern states more likely to smoke.

As the smoking rate has declined, Americans' negative views on smoking have persisted. More than half of U.S. adults say smoking should be illegal in all public places while an increasing percentage say that smoking should be totally illegal.

A president can encourage citizens to live a healthy lifestyle and advocate for legislation and regulatory actions that promote healthy choices. President Obama and the first lady have taken some concrete steps in doing so by implementing initiatives such as Let's Move! to encourage regular exercise and leading the movement to update nutrition labels on food and drink. Obama also signed the Family Smoking Prevention and Tobacco Control Act in 2009, which gave the FDA the power to regulate tobacco products. Even so, it is unclear whether most Americans are aware of these actions and to what extent they might influence their behavior.

As Barack Obama completes his final term as president, U.S. adults' health habits have changed only marginally, with the exception of smoking. Although fewer U.S. adults say they eat healthy, this decline could be a result of adults having a better understanding of what foods are nutritious, as opposed to making a deliberate choice to eat less healthy. Americans are slightly more likely to exercise frequently, but that alone is unlikely to be enough to reduce the record-high obesity rate. Regardless, the new low in smoking among U.S. adults is an encouraging sign that long-term improvement in health habits remains possible.

Results are based on telephone interviews conducted from 2008-2016 as part of the Gallup-Healthways Well-Being Index survey, with a random sample of 2,415,499 adults, aged 18 and older, living in all 50 U.S. states and the District of Columbia. For results based on the total sample of national adults, the margin of sampling error is ±.08 percentage points at the 95% confidence level. All reported margins of sampling error include computed design effects for weighting. 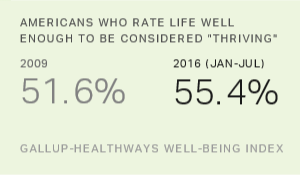