PRINCETON, N.J. -- The Ronald Reagan presidency offers the most recent historical clues as to whether President Barack Obama's popularity could affect voters' choices for president in November. Like Obama, Reagan was earning job approval ratings in the low to mid-50s in the second half of his eighth year. And the Republican nominee for president that year, George H.W. Bush, won the election. In contrast, two second-term presidents with even higher job approval ratings -- Bill Clinton in 2000 and Dwight D. Eisenhower in 1960 -- each saw their party's candidate lose the election.

Al Gore is one of two candidates -- the other being Republican Richard Nixon who narrowly lost the popular vote in 1960 -- who failed to inherit the high popularity of their party's sitting president and enjoy an easy win. The 2000 election, however, requires a footnote because Gore won the popular vote by 0.5% but ended up losing the Electoral College.

The 1968 election was another example of a close race in the popular vote; however, the outcome -- Nixon's victory -- conformed with the outgoing Democratic incumbent Lyndon B. Johnson's relatively low job approval rating amid extensive public concern about the Vietnam War. Similarly, the 2008 election was another logical case of the opposing party candidate -- Obama -- winning an open race when the two-term incumbent, George W. Bush, was highly unpopular.

This hodgepodge of outcomes relative to presidential approval in non-incumbent election years sharply contrasts with incumbent re-election years when the president's job approval rating has been a strong indicator of a second term.

High U.S. Satisfaction Also Not a Guarantee for President's Party

Gallup has found useful relationships between incumbent re-election and other measures of the nation's mood, namely Americans' satisfaction with the direction of the country and their degree of concern with the national economy. However, both metrics have less predictive value in non-incumbent years.

Gallup's economic indicators offer better news for the Democrats, as the economy is not nearly as dominant a national concern in Americans' minds as it was in 2008, even though it isn't as remote of a concern as it was in 2000. Thirty-five percent of Americans name a major economic problem as one of the nation's top problems, which is higher than the 17% found in October 2000 but well below the 69% in October 2008.

Also, according to the Gallup Economic Confidence Index, Americans' overall view of the economy today tilts slightly more negative than positive, with a -12 index score. While that is nowhere near the highly positive reading in October 2000 (+44), it is not nearly as negative as the -65 recorded at the same point in 2008. Perhaps most notably, the Economic Confidence Index today is nearly identical to where it stood when Obama was re-elected in 2012, and thus it may not be a great liability for Hillary Clinton.

Ultimately, all three dimensions -- approval of the incumbent president, satisfaction with the direction of the country and perceptions of the U.S. economy -- point to a similar conclusion. The mood of the country is not a good indicator of the outcome of open-seat presidential elections, at least not when the mood is good, such as it was in 2000 and to a lesser extent in 1960. A sour public mood -- as in 2008 and 1968 -- may have more influence in open elections, making it difficult for the president's party to hold the White House.

Additionally, the reality that the president's party has lost in four of the last five open presidential elections suggests voters may simply be ready for a change after a president has served two terms.

The bottom line for the 2016 election is that, while Obama's relatively high job approval ratings may make it easier for Clinton to make her case to the voters, attaching herself to the incumbent is not as simple as in 2000 when all of the major indicators of public mood were positive. Further, even if all of the indicators were positive, the historical patterns show Clinton's election would be far from guaranteed.

The deciding factor could be something entirely different, namely Americans' reaction to the candidates as people. Gallup trends since 1992 show that the candidate with the higher favorable rating always wins. Thus far, Clinton has the upper hand in favorability, but it is within the context of both major party candidates maintaining unprecedentedly low favorable ratings, so it is not assured that the historical pattern of "the better-liked candidate always wins" will apply.

Results for President Obama's job approval rating and U.S economic confidence are based on telephone interviews conducted Sept. 6-8, 2016, on the Gallup U.S. Daily survey, with a random sample of 1,520 adults, aged 18 and older, living in all 50 U.S. states and the District of Columbia. For results based on the total sample of national adults, the margin of sampling error is ±3 percentage points at the 95% confidence level. All reported margins of sampling error include computed design effects for weighting.

Results for U.S. satisfaction and the Most Important Problem are based on Gallup's August Work and Education Survey, conducted by telephone Aug. 3-7, 2016, with a random sample of, 1,032 adults, aged 18 and older, living in all 50 U.S. states and the District of Columbia. For results based on the total sample of national adults, the margin of sampling error is ±4 percentage points at the 95% confidence level. All reported margins of sampling error include computed design effects for weighting. 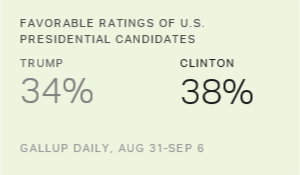 At 38%, Hillary Clinton's favorable rating remains near its campaign low, down from 43% during the Democratic National Convention and 46% at the start of the year. Donald Trump's rating is now 34%, an average score for Trump. 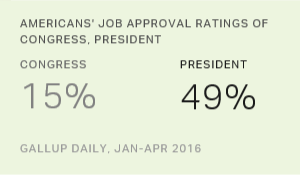