This year, for the first time in the 49 years Gallup has asked about it, less than half of Americans want to replace the Electoral College with a popular vote system.

The reason for this shift in opinion is clear: In the aftermath of this year's election, the percentage of Republicans wanting to replace the Electoral College with the popular vote has fallen significantly. Americans' ability to correctly identify the winner is similar to what it was after the disputed 2000 election -- 65% named Gore the popular vote winner, 16% said Bush was and 18% were unsure. The results by party in 2000 were also similar to what they are today.

Despite some Democratic elected officials and media pundits calling for intensively studying, if not doing away with, the Electoral College, the country is now sharply divided on the issue.

In previous years, Americans preferred amending the U.S. Constitution to abolish the Electoral College, but not in 2016. One possible reason is that Republicans are aware that President-elect Trump would not have won the presidency without winning the Electoral College, and that Republicans possess a state-by-state advantage in this area, at least for now. Also, the popular vote is clearly advantageous to Democrats, who can accumulate big totals in heavily Democratic states such as California.

With two-thirds of Congress and two-thirds of states needed to pass this kind of constitutional amendment, it is unlikely the Electoral College is going anywhere. 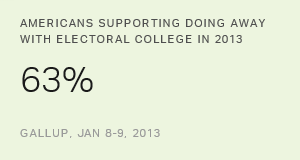