Trump's team has battled some media estimates of the size of his inauguration crowd, media descriptions of Trump's executive order on immigration and refugees as a "Muslim ban," and one reporter's assertion that Trump removed a bust of Martin Luther King Jr. from the Oval Office, which the White House refuted. Meanwhile, Trump has been on the defensive for his team's reliance on "alternative facts" and his assertions of voter fraud in the November election, which The New York Times deemed a "lie."

It is against this backdrop that nearly three in four Republicans (74%) say the media has been too tough on Trump. Democrats, on the other hand, are more divided, with 49% saying the media has not been tough enough and 40% saying its coverage has been about right.

The public's mood, according to this late January poll, differs from that in January 2009, when only 11% of Americans thought the news media had been too tough on newly elected President Barack Obama. Nearly half (48%) thought the media was about right in its coverage of Obama and his administration, while 38% said it was not tough enough.

As is the case today, Republicans were more likely than Democrats to be unhappy with the media: In 2009, 65% of Republicans thought the media was not tough enough on Obama, while 66% of Democrats thought it was about right.

Americans as a whole are split in their assessments of whether the news media is covering the Trump administration fairly. However, this masks broad disapproval among Republicans, who mostly believe the media -- which Trump has declared "the opposition party" -- is being too hard on the new Republican president. Meanwhile, about half of Democrats think the media should be tougher on Trump.

Results for this Gallup poll are based on telephone interviews conducted Jan. 30-31, 2017, on the Gallup U.S. Daily survey, with a random sample of 1,018 adults, aged 18 and older, living in all 50 U.S. states and the District of Columbia. For results based on the total sample of national adults, the margin of sampling error is ±4 percentage points at the 95% confidence level. All reported margins of sampling error include computed design effects for weighting. 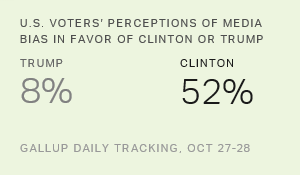