WASHINGTON, D.C. -- A majority of Americans are optimistic that President Donald Trump can do a good job of making the country prosperous, but they are divided on whether he can improve energy policies, and most think he will do a poor job of protecting the environment. On all three issues, Americans are less optimistic about Trump than they were about George W. Bush or Barack Obama in the early days of their presidencies.

Trump has been less popular in general than either Bush or Obama at the start of their terms in office. His favorability ratings have been lower, as have his job approval ratings. Trump's 45% job rating in January was the lowest initial job reading for any president in Gallup polling dating back to 1953.

High expectations for Bush and Obama were somewhat dampened by the end of their terms. For both presidents, more Americans were likely to expect them to do a good job on the environment, energy or prosperity as they took office than wound up thinking they had done so by the end of their presidencies.

Trump has consistently found his strongest public support on economic issues. Gallup polling the week after he won the election in November found Americans most optimistic that Trump would be able to "reduce unemployment and create new jobs" (62%) and "improve the economy" (60%). In the same poll, only 35% said Trump would be able to "improve the quality of the environment" -- tied for the smallest percentage for any of the 17 items listed.

On the often-linked issues of the environment and energy, Trump has proposed major rollbacks of Obama-era environmental policies as he shifts toward increasing U.S. energy production. He vowed on the campaign trail to cancel U.S. involvement in the historic Paris agreement on climate change signed by 194 nations last year and plans to end regulations put into place by Obama for cutting greenhouse pollution from coal-fired power plants. Trump's proposals come at a time when Americans' concerns about energy are shrinking.

The gulf between Republicans and Democrats (including those who lean to either party) is larger on each of the three issues than it was for either Bush or Obama during the first months of their first terms. The smallest gap between the parties now is on the environment, largely because relatively few Republicans and leaners (66%) expect Trump to do a good job. In contrast, 89% of Republicans say he will do a good job of making the nation prosperous. Meanwhile, between 11% and 24% of Democrats think Trump will do a good job on any of the issues.

The lack of any honeymoon for Trump is evident once again in the public's views of how he will handle the three key issues of prosperity, energy and the environment. Although a slight majority of Americans are optimistic about the effect his presidency will have on national prosperity, they are far less optimistic than at the start of the last two presidencies. Furthermore, bucking normal public support for new presidents, less than half of Americans are optimistic Trump will advance the nation's energy or environmental policies.

Trump might see less of a drop from expectations to ratings of actual performance than Obama or Bush did because expectations for him are already so low. But his plans for action on the environment and energy will seemingly require real shifts in public opinion to succeed, given Americans typically view energy problems as less important than protecting the environment. 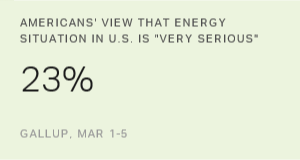 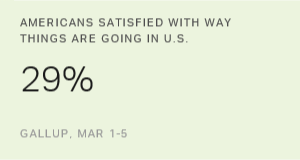