WASHINGTON, D.C. -- In a contentious political landscape, Americans increasingly believe the news media generally favors one political party over the other. Sixty-two percent of U.S. adults say the media has a favorite, up from about 50% in past years. Just 27% now say the media favors neither major party. When Gallup last asked this question in February 2003, Americans were about evenly divided on the issue. Americans were also evenly split when the question was first asked in April 1995. In December 2000, in the midst of the election results recount between George W. Bush and Al Gore, slightly more Americans perceived partisan bias in the news media (51%) than believed the news media was politically neutral (41%).

This is not new. Americans who perceive media bias have always said the direction of that bias leaned in favor of the Democrats, although the percentage holding that view has varied. The gap was smaller in 2003 and 1995, but was more similar to today's attitudes in 2000. Perhaps not surprisingly, Republicans are fueling the belief that the news media favors Democrats: 88% of Republicans who believe the media is biased say this. Democrats are split in their views, with 43% naming Democrats as the recipients of that bias and 40% saying the bias is toward Republicans. These are also not new perceptions; Americans have been saying for quite some time that news organizations are inaccurate. In December 2000, when another controversial election made headlines, 65% said the media was often inaccurate. But at several other points before 2000, Americans were either more likely to say the media got the facts straight or closely divided in their opinions on the matter.

A separate poll conducted in September 2016 mirrors the latest results showing views of the news media as often inaccurate, with 32% of Americans reporting a "great deal" or "fair amount" of trust in the news media to report the news fairly and accurately.

During the 2016 presidential campaign, President Donald Trump and the GOP often said Hillary Clinton received favorable -- even preferential -- news coverage, while Democrats lamented that the media aired Trump's speeches and events uninterrupted. Overall, Americans' belief that the media favors one party over the other is the highest it has been in more than 20 years.

Amid Trump's accusations of media bias and inaccurate reporting over the past year or so, the frenzy over media bias has seemed to reach a fever pitch. Trump has labeled certain media organizations as purveyors of "fake news" and has referred to them as "the enemy of the people." Politicians, academics, talk radio hosts and other critics have also accused the media of partisan bias.

Results for this Gallup poll are based on telephone interviews conducted March 9-29, 2017, with a random sample of 789 adults, aged 18 and older, living in all 50 U.S. states and the District of Columbia. For results based on the total sample of national adults, the margin of sampling error is ±4 percentage points at the 95% confidence level. All reported margins of sampling error include computed design effects for weighting. 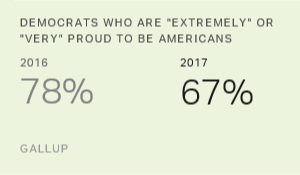 Sharply Fewer Democrats Say They Are Proud to Be Americans

Fewer Democrats than in 2016 say they are "extremely" or "very" proud to be Americans, leading to a new low in such patriotic feelings among all U.S. adults.