skip to main content
Politics
Less Than a Third Have Positive Image of McConnell, Schumer

WASHINGTON, D.C. -- As the possibility of a government shutdown looms, fewer than one in three Americans view either party's U.S. Senate leader favorably. About four in 10 Americans have an unfavorable view of Majority Leader Mitch McConnell (44%) and Minority Leader Chuck Schumer (36%).

Although both men have been prominent figures in Congress for decades, roughly a third of Americans don't know either well enough to have an opinion.

These data, collected in an April 5-9 Gallup poll, come as Congress negotiates terms of a spending bill to avoid a government shutdown. This will be one of the first major challenges for the duo; while McConnell has led Republicans in the chamber for a decade, Schumer became leader of the Democratic minority in January -- though he has been a U.S. senator from New York since 1999.

This marks the first time Gallup has measured Schumer's image. His initial favorable rating matches the 31% McConnell -- then Senate minority leader -- received when Gallup first polled on his favorability in March 2010. McConnell's image has been consistently less positive than that in polls since then, with his favorable rating ranging mostly in the 20s -- and his 18% favorable in 2015 marking a low for the majority leader. Since 2013, Americans have consistently been more likely to have an unfavorable view of McConnell. McConnell's favorability is not far off from that of his predecessor, Democratic Sen. Harry Reid, who is now retired. Reid's favorability ranged from 21% to 29% over the course of his reign as majority leader.

McConnell is viewed favorably by a slight majority of Republicans (52%), similar to Schumer's 54% favorable among Democrats. This is McConnell's highest rating among Republicans since 2010, and is 22 percentage points higher than the previous reading from 2015 -- explaining the bump in McConnell's overall favorability. McConnell's favorability among independents is now at 24% -- an increase of 10 points since October 2015. His rating among Democrats, however -- at 8% -- is down five points.

McConnell has regained his footing among his own party, perhaps because of a renewed optimism among Republicans, who now control the presidency as well as both chambers of Congress. This empowerment is new to McConnell, who has had to contend with a Democratic-controlled presidency or House of Representatives, or both, in his time as leader -- not to mention Democratic control of the Senate for the bulk of his time as the chamber's top Republican figure.

It's possible that the GOP rank-and-file's previously low favorable ratings of the majority leader resulted from his inability to advance the party's agenda. But the election of Donald Trump and GOP control of both houses of Congress could be giving Republicans a greater faith in McConnell's ability to do so.

Schumer, who has been in the Senate since 1999 but is new to his role as the top Democrat in the chamber, could suffer the same ratings decline as his Republican counterpart if Democrats sense that their party leaders are ineffective at either blocking Trump or advancing their own agenda.

With Congress' approval having dipped in two consecutive polls, both McConnell and Schumer might stand to gain in stature from working together -- especially because their unfavorable ratings outweigh their favorable ones. But with party polarization reaching new extremes, it is difficult to foresee bipartisan cooperation in the near future. 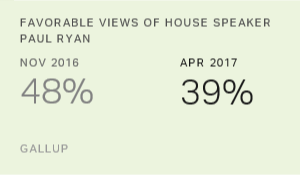 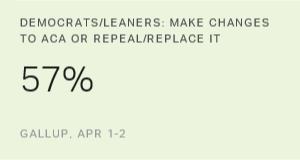