WASHINGTON, D.C. -- U.S. adults who purchased their health insurance coverage through a federal or state healthcare exchange -- about 15% of those who report having insurance -- rate the quality of their coverage lower than do those who purchased their coverage via another source. Both groups are generally positive about their insurance, but the 74% of exchange purchasers who consider the quality of their coverage to be "excellent" or "good" is marginally lower than the 81% of those whose coverage stems from another source who say the same.

Fewer insurance providers and increased premiums on some state exchanges in 2017 could be driving perceptions that the quality of coverage purchased on exchanges lags behind that acquired from other sources.

Since 2008, Gallup has tracked the share of U.S. adults without health insurance -- a percentage that fell to a record low of 10.9% in each of the last two quarters of 2016. The current results are based on 24,156 interviews with U.S. adults aged 18 and older on Gallup's Daily tracking poll from March 8 to May 7 of this year. Gallup not only asked individuals to identify the source of their health insurance coverage -- including if they purchased insurance on an Affordable Care Act (ACA) exchange -- but to rate the quality of their coverage.

Least-Healthy Americans Most Likely to Purchase From Exchanges

In addition to asking about their health insurance coverage, Gallup asked adults to rate their own physical health on a five-point scale between "excellent" and "poor." Those who assess their own physical health as "poor" are the most likely to have purchased their coverage through an ACA exchange. In fact, individuals with the poorest self-reported health are more than twice as likely as individuals with excellent health to have purchased coverage through an exchange.

The discrepancy in exchange purchases between those in poor and excellent health could stem, in part, from differing incentives for those two groups. For example, healthy individuals without coverage through an employer or other source may decide to pay the penalty for not carrying coverage -- an option less viable for adults in poor health who do not qualify for coverage under another source.

To sustain robust exchanges, healthcare markets must attract enough healthy purchasers whose lower cost burden helps offset the steeper costs of less-healthy purchasers. Yet, these results suggest that not only are adults with the poorest health the most likely to purchase coverage on exchanges, but they also receive the lowest-quality coverage. Nearly three-quarters of those with a plan fully paid for by themselves or a family member -- many of whom bought through exchanges -- say their health insurance coverage is excellent or good. By comparison, about four in five adults who receive their insurance through an employer or Medicaid rate their coverage highly.

Across key demographic groups, adults aged 65 and older grade their health insurance coverage the most positively. Nearly nine in 10 in this age group -- the vast majority of whom receive Medicare coverage -- consider their insurance to be excellent or good. By comparison, three-quarters of those aged 25 to 65 rate their coverage this highly.

In addition to contributing to the lowest uninsured rate since Gallup began tracking Americans' health insurance coverage in 2008, the Affordable Care Act today is more popular than at any point since it went into effect. Republicans and Democrats alike have warmed to the healthcare law in recent months, with 55% of U.S. adults approving of it in April 2017 after only 42% did so last November.

Yet uncertainty about the future of the healthcare system continues. In May, House Republicans passed a bill repealing many of the key features of the ACA. Against the backdrop of a Congressional Budget Office score that estimates 23 million Americans could lose coverage under the House bill, Senate Republicans say they will scrap the House version of the bill and start anew.

Meanwhile, in May, healthcare surged to tie dissatisfaction with government at the top of Americans' list of the biggest problems facing the country. And, despite a declining uninsured rate in recent years, Americans' out-of-pocket expenses on healthcare continue to rise. As leaders debate the merits of the ACA and competing Republican alternatives, both parties must pursue concurrent goals of minimizing healthcare costs and the number of uninsured while also maximizing the quality of the coverage received.

Results for this Gallup poll are based on telephone interviews conducted March 8-May 7, 2017, on the Gallup U.S. Daily survey, with a random sample of 24,156 adults, aged 18 and older, living in all 50 U.S. states and the District of Columbia. For results based on the total sample of national adults, the margin of sampling error is ±1 percentage point at the 95% confidence level. 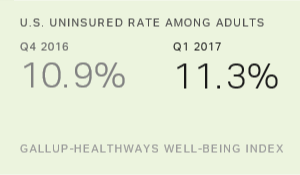