WASHINGTON, D.C. -- Five months into Donald Trump's presidency, 49% of U.S. adults believe immigrants help the nation's economy by providing low-cost labor, outweighing the 40% who think immigrants hurt the economy by driving down wages. This is a near reversal of the last time Gallup asked this question, in 2005, when more thought immigrants harmed (49%) than helped (42%) the economy. The latest results come from a June 7-11 Gallup poll.

Gallup's trend on this question stretches back to Bill Clinton's presidency, in 1993. At that time, shortly after the 1990-1991 recession, nearly two-thirds of U.S. adults thought immigrants did more harm than good for the economy. This concern eased in 1999 and 2000, but briefly shot up again in 2004, when former President George W. Bush proposed a temporary worker program that would have allowed 8 million illegal immigrants to obtain legal status before dropping back to 49% in 2005.

Trump campaigned for president in 2015 and 2016 on a platform of blocking undocumented immigrants from entering the country and deporting those already living in the U.S. As a result, debate over immigrants, legal and illegal, came to the fore of the national discourse at the start of Trump's campaign and intensified as he has moved to deliver on his pledges as president. This debate has touched on the potential that immigrants are taking jobs from American citizens and whether illegal immigrants should receive government services such as healthcare and education. Americans' views on this issue have been relatively consistent since 1993, with the great majority consistently saying immigrants mostly take jobs Americans don't want. This was highest in 2004, when 77% believed immigrants mainly take undesired jobs.

Proponents of immigration often assert that immigrants benefit the U.S. economy due to their willingness to accept lower wages than Americans will work for, keeping the costs of goods and services down. By contrast, opponents of illegal immigration say that illegal immigrants drive down wages, lowering the incomes of Americans who are already employed in the lowest-paying jobs.

Immigrants Aren't Having an Effect on Americans' Jobs or Companies

Immigration has long been a contentious issue in the U.S., dating back to the 1800s, when immigrants from outside of Northern Europe began arriving in large numbers. Since then, the issue has never really faded from American consciousness, as waves of immigrants from other areas of the globe continue to arrive in the U.S. As Gallup has determined in recent years, more Americans believed immigrants hurt the economy by driving down wages, rather than helped it. In 2017, this flipped, potentially due to a renewed appreciation for immigrants or a backlash against President Trump's immigration policies.

Public voices on immigration have been mixed, with some major companies continuing to push for additional H-1B visas to lure more legal immigrants to this country, while some Americans decry more immigration at all. It remains to be seen whether there will be increased immigration over time. With the president touting increased "border security" in his first 100 days to keep out illegal immigrants, there will continue to be controversy over who should or should not be allowed in this country. 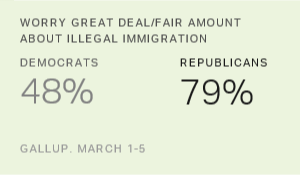