Americans have become more familiar with Sen. Elizabeth Warren, with nearly two-thirds (65%) saying they have an opinion of her, up from just over half (52%) two years ago. While Warren's profile has risen with U.S. adults, Americans remain split in their opinions of her. Thirty-four percent say they view her favorably, up from 28% in 2015, and 31% view her unfavorably, an increase from 24% two years ago.

The latest ratings, recorded in an Aug. 2-6 Gallup poll, come as Warren is developing a prominent role among Democratic leaders who are currently locked out of power in Washington. A recent speech at a grassroots conference for liberal activists drew attention for her proclamation that liberals are now the core of the Democratic Party. At the conference, she also rejected the idea that her party needs to become more moderate. Many political observers consider the Massachusetts senator to be a viable potential presidential candidate in 2020.

In polls throughout 2014 and 2015, Warren's image was split, with similar percentages viewing her favorably and unfavorably. Warren is far more well-known in 2017 than she was in 2014, when 62% had no opinion of her, compared with 34% who have no opinion now.

More Than Six in 10 Liberals Have Favorable View of Warren

Warren is popular among self-identified political liberals nationally, with 62% viewing her favorably. Meanwhile, about one-third (34%) of U.S. moderates have a positive view of her, while just 15% of conservatives view her favorably.

Warren's favorable and unfavorable ratings among the American people have increased over the past two years as she has become better known. The most recent ratings maintain the nearly equal levels of positive and negative favorability seen since Gallup first polled about her in 2014.

Views of political figures are commonly split among various ideologies and political parties, given the partisan lens through which Americans view these individuals. But Warren's popularity among liberals and Democrats is something to watch as she draws applause from left-leaning Americans and describes liberals as the "heart and soul of today's Democratic Party." For now, it is unclear if Warren has ambitions beyond the U.S. Senate, but if she does, she may be able to leverage her standing among those in an important segment of her party to advance a potential run at a higher office. 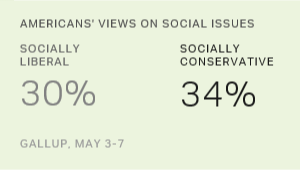