WASHINGTON, D.C. -- Nearly twice as many Americans today think a third major party is needed in the U.S. as say the existing parties do an adequate job of representing the American people. The 61% who contend that a third party is needed is technically the highest Gallup has recorded, although similar to the 57% to 60% holding this view since 2013. Barely a third, 34%, think the Republican and Democratic parties suffice. Americans' desire for a competitive third party has waxed and waned over the past 15 years, but rose to 57% or higher a few times in polls conducted before 2013, including two in 2007 and one in 2010.

Demand for a third party was markedly lower in Gallup's first two measurements -- in 2003 and 2006 -- when relatively few Republicans and fewer than two in three independents thought a third party was needed in these years of George W. Bush's Republican administration.

Support for a third party was also lower in 2008 and 2012 -- both presidential years when demand dipped from about 70% to about 60% among independents, likely because the major-party presidential candidates running during those elections were relatively popular. The same pattern did not materialize in 2016, a presidential election year featuring the two most unpopular candidates in Gallup's polling history. At that time, a solid majority of Americans, including 73% of independents, still thought a third major party was needed.

While more than three-quarters of political independents would prefer to have a third major-party player in the U.S. political system, Republicans and Democrats are closely split between favoring that and saying the current two-party system is adequate.

These party results largely conform to the historical patterns, although Democrats tended to be more in favor than Republicans of the formation of a third major party during the Bush presidency in 2003 and 2006. Since then, there has been little difference between the parties, apart from a few isolated occasions. At various points since 2007, a majority of Americans have contended that a third major political party is needed in the U.S., while the minority have believed the two major parties adequately represent the American people. That pattern continues today with an unprecedented five-year stretch when demand for a third major party has been 57% or higher, including 71% or higher among independents.

While this may seem promising for any group thinking about promoting such a party, it is one thing to say a third major party is needed and quite another to be willing to join or support it. Americans' backing of the idea could fall under a mentality of "the more, the merrier," in which they would be pleased to have more viable political choices even if they vote mainly for candidates from the two major parties. And that says nothing of the structural barriers third parties face in trying to get on the ballot.

With most Republicans and Democrats viewing their own party favorably, the real constituency for a third party is likely to be political independents, meaning the party would have to be politically centrist. Thus far, the Green and Libertarian parties have succeeded in running national presidential campaigns but not in attracting big numbers of registered members. But with record numbers of Americans frustrated with the way the nation is being governed, the country could be inching closer to having enough people who want an alternative to the status quo to make it a reality, at least with the right candidate at the helm. 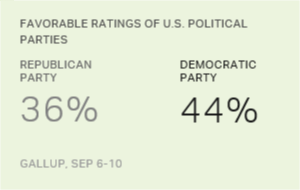 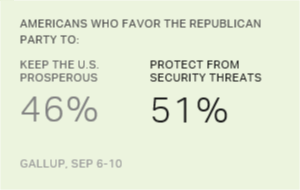 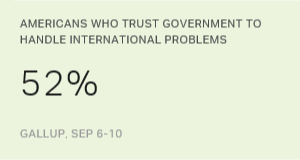