WASHINGTON, D.C. -- A new Gallup question gauging public support for Donald Trump's presidency shows how far Americans fall on either side of the divide. While a strong majority of Democrats (73%) oppose almost everything Trump is doing as president and a slim majority of Republicans (53%) support most of his actions, neither Democrats' opposition nor Republicans' support is absolute. Reflecting the generally polarized nature of U.S. politics today, a majority either dislike most of what Trump is doing (43% give a score of 20 or lower) or support almost everything he's doing (22% give a score higher than 80). About a third of Americans have relatively mixed feelings, neither strongly supporting nor opposing the Trump presidency.

Among Democratic and Republican partisans, the averages for each group fall at opposite ends of the scale:

The divide between liberals and conservatives is less pronounced than that between Democrats and Republicans. The average level of support for Trump's actions as president is 20 among liberals and 66 among conservatives. Combining party (with independent "leaners" included in party totals) and ideology produces the following average levels of support for the president's actions.

Previous polling on the Trump presidency has consistently shown the huge partisan divide in general, with almost all Democrats disapproving and most Republicans approving. Gallup polling in February went a step further with a measure of how strongly Americans approved or disapproved.

None of the previous polling, however, measured just how far Americans -- especially partisans -- have moved to the limits of support or opposition. The zero-to-100 scale provides more detailed evidence of the extent to which the vast majority of Democrats oppose the Trump presidency, along with the fact that the opposition is not universal within the Democratic Party. It also shows that support within his own party, while strong, is far from absolute.

Trump has taken actions that cross party lines, most notably siding with Democratic congressional leaders against the Republican leadership in Congress last month on a debt ceiling deal. He also has criticized Republican leaders on more than one occasion.

Trump's actions as president have not followed strict party lines, and partisan reactions have followed suit. Gallup's new, more nuanced measure of support for the Trump presidency reveals that while support and opposition fall predictably along partisan lines, they are nowhere near absolute in either party.

Results for this Gallup poll are based on telephone interviews conducted Oct. 2-5, 2017, on the Gallup U.S. Daily survey, with a random sample of 2,016 adults, aged 18 and older, living in all 50 U.S. states and the District of Columbia. For results based on the total sample of national adults, the margin of sampling error is ±3 percentage points at the 95% confidence level. 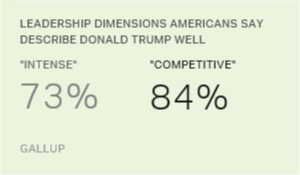 President Donald Trump's job approval rating has been either 34% or 35% in Gallup Daily tracking since Aug. 20, producing a new low weekly average of 35% for Aug. 21-27. 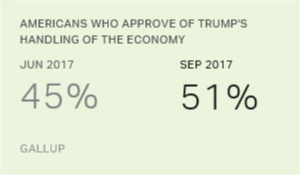