WASHINGTON, D.C. -- The percentage of U.S. adults who self-identify as professional football fans has fallen from 67% in December 2012, the last time Gallup asked the question, to 57% today. In contrast, every other sport measured in the Oct. 10-11 survey, except for Olympic sports, did not change meaningfully from five years ago.

The decline in professional football comes amid ongoing controversy over player protests during the playing of the national anthem. President Donald Trump criticized the protests earlier this year, which led to more widespread protest activity by National Football League players. Athletes in other sports have protested during the national anthem, but not nearly to the degree professional football players have.

The anthem situation is the latest, but not the only, controversy that has dogged professional football. In recent years, the NFL has come under fire for its handling of domestic violence cases involving players and its response to research on the effects of concussions on brain health among former players.

While professional football's fan base has declined, the percentage of Americans who say they are fans of college football is virtually unchanged from 54% in 2012 to 56% this year. College and professional football are now essentially tied for having the second-largest fan base among the sports Gallup has tracked, behind Olympic sports.

At 63%, Olympic sports continue to claim the largest number of fans among U.S. adults even after the sharp decline in their fan base since 2012, perhaps because there was no Olympiad this year as there was five years ago.

Republicans and independents show double-digit declines in the percentage of each group identifying as pro football fans, while the smaller decrease among Democrats is within the margin of error. As a result, there is now a significant party gap, with 66% of Democrats and 55% of Republicans identifying as fans.

Over the same time period, Republicans' affinity for college football has not declined (60% in 2012 and 64% currently). The percentages of independents and Democrats who are college football fans are also essentially unchanged.

Pro football has effectively held onto its fan base among young adults and shows a relatively small decline among nonwhites. Men, older Americans, whites and Americans with at least a college degree have shown greater declines in the percentage identifying as pro football fans.

The drop in the percentage of U.S. adults identifying as professional football fans appears to be manifesting itself in lower television ratings and declining ticket sales for the league's games, which in turn is affecting the sport's revenues. The decline in the popularity of pro football may have more to do with the controversial actions of its players off the field and before the games than it does with what they are doing between the kickoff and the final whistle. Still, the off-field controversies have not changed the fact that pro football remains one of the most popular sports in the U.S.

It is uncertain how much the national anthem controversy has contributed to the decline in pro football fans compared with other controversies or factors. The league is trying to develop a policy to settle the matter in a way that respects players' right to protest while not turning off fans who find those actions offensive. Certainly, quelling the controversy -- and avoiding new ones -- could help the NFL win back many of its fans and regain its strong positioning on the American sports landscape. Pro baseball suffered similar declines amid Major League Baseball's 1994-1995 labor strike and the steroids controversy in the 2000s, but has since recovered its fan base.

Results for this Gallup poll are based on telephone interviews conducted Oct. 10-11, 2017, on the Gallup U.S. Daily survey, with a random sample of 1,012 adults, aged 18 and older, living in all 50 U.S. states and the District of Columbia. For results based on the total sample of national adults, the margin of sampling error is ±4 percentage points at the 95% confidence level. All reported margins of sampling error include computed design effects for weighting. 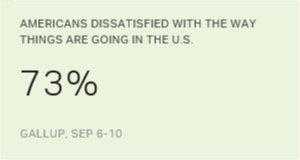 How Long Are We Willing to Live With National Anxiety?

A destabilizing level of public dissatisfaction persists despite an improving economy and radical shifts in the person occupying the White House. 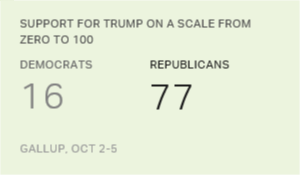 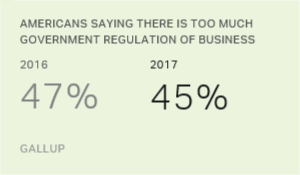