WASHINGTON, D.C. -- Americans' preferences for a government-run healthcare system versus a system based on private insurance are now divided. This marks a significant shift in attitudes from earlier this decade, when Americans consistently preferred the private insurance option. This mixed reaction toward a government-run healthcare system is similar to those seen in the past, when Democratic presidents proposed ways to increase government involvement in healthcare:

Although the 22% of Republicans who support a government-run system is low on an absolute basis, it is the highest in Gallup's seven-year trend. Republicans' shift in attitudes accounts for most of the overall increase in support for the government system in this year's update.

Americans Split on a Medicare for All System

Vermont Sen. Bernie Sanders in recent years has become a highly visible Democratic politician calling for expanded government involvement in the nation's healthcare system. He -- along with one-third of Democratic senators -- recently introduced a Senate bill calling for a single-payer, "Medicare for all," government-funded health insurance system.

Gallup's Health and Healthcare survey this year included a question asking directly about support for this specific type of plan, including an explicit "don't know enough to say" option. Although most Americans choose the "don't know" option, those with an opinion about the specific Sanders-type bill as described in Gallup's wording are about evenly divided.

Other survey organizations also have found generally mixed opinions about a single-payer, government system -- although the results vary, depending on how it is described. The high percentage who say they "don't know enough to say" when that is a response option (as in Gallup's wording) suggests that Sanders' efforts to promote a single-payer plan throughout his run for president and over the past two years have not made it a widely understood or familiar proposal.

The debate over the appropriate role for the U.S. government in delivering healthcare has been on the nation's policy agenda for three-quarters of a century. During this time, Americans' attitudes toward increasing government involvement in healthcare -- in general and in reaction to specific healthcare plans -- have been decidedly mixed.

Currently, the public is as likely to say they favor the concept of a healthcare system run by the government as to favor a private insurance system, a shift from all prior years this decade. These divided views suggest that Americans have yet to be persuaded that either a government-run system or a system based mostly on private insurance is the most desirable alternative for addressing issues relating to healthcare access and cost.

The healthcare issue has been, and continues to be, highly partisan, with debates over healthcare options among the most rancorous of the day. Republicans continue to push for dismantling the ACA, while many Democratic senators want to go beyond what the ACA does and institute a government-run, single-payer system. The mixed guidance from the public shows that the challenge for both sides remains persuading a significant majority of Americans that their way is the right way. 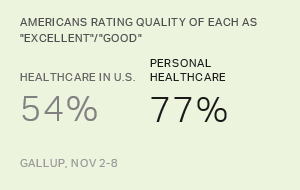 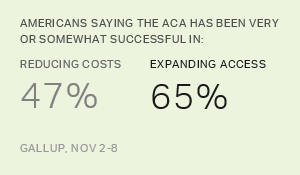 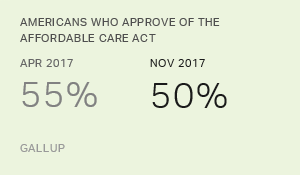