skip to main content
Politics
2017 Update on Americans and Religion

WASHINGTON, D.C. -- The end of the calendar year provides a good time to take stock of Americans' religion, including the way in which it remains highly intertwined with politics.

Protestants continue to make up the largest religious group in America, totaling 49% of U.S. adults interviewed as part of Gallup's Daily tracking in 2017. Catholics are the next-largest group, at 23% of the population, with Mormons accounting for about 2%. This means that about three-quarters of Americans, overall, identify with a Christian faith.

Another 6% of the population identifies with a non-Christian faith, including Judaism, Islam and others, while 21% of Americans do not have a formal religious identity. All of these groups are within a percentage point of where they were in 2016, suggesting that the shifts seen in previous years have stabilized, particularly the growth among those with no religious identity.

Mormons are by far the most religious of the major religious groups in the U.S., with 74% classified as highly religious. Protestants, Muslims and Catholics are more of a mix of highly and moderately religious adults, while Jews and those who identify with another non-Christian religion are the least religious.

The relationship between religiosity and political party identification remained virtually the same in 2017 as in 2016. About half of Republicans are highly religious, compared with about a third of independents and Democrats. Religiosity among the latter two groups is almost identical, including 38% and 39% of independents and Democrats, respectively, who are not religious.

Americans who are highly religious are much more likely to approve of President Donald Trump's performance in office than are those who are moderately or not religious. These relationships are not unexpected given the correlation between religiosity and party identification. President Barack Obama had his highest approval ratings in office among those who were not religious, while George W. Bush, like Trump, had his highest approval ratings among the highly religious.

The overall religious composition of the adult population in the U.S. is about the same as it was last year, with the significant majority of Americans identifying with either the Protestant or Catholic faith, along with about one in five who say they have no formal religious identity. Americans are also about as religious this year as last year, based on their self-reported church attendance and the importance of religion in their lives. Two-thirds of Americans are either highly or moderately religious.

The basic pattern of association between Republican partisan identity and higher levels of religiosity continued in 2017, with the associated finding that Trump does better among those who are highly religious than among those who are less religious. The relationship between religiosity and Trump approval is primarily found among non-Hispanic white Americans; nonwhites give Trump very low job approval ratings regardless of their religiosity.

Results for this Gallup poll are based on telephone interviews conducted Jan. 2-Dec. 20, 2017, on the Gallup U.S. Daily survey, with a random sample of 126,965 adults, aged 18 and older, living in all 50 U.S. states and the District of Columbia. For results based on the total sample of national adults, the margin of sampling error is ±1 percentage point at the 95% confidence level. All reported margins of sampling error include computed design effects for weighting. 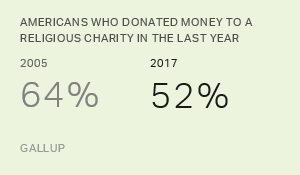 The percentage of Americans donating to religious charities has steadily declined over the past decade, dropping from a peak of 64% in 2005 to 52% this year. 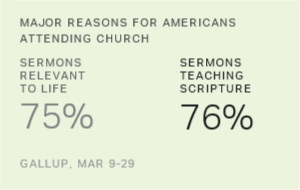