WASHINGTON, D.C. -- Slightly more than half of Americans (52%) say they have donated money to a religious charity over the past year, down 12 percentage points from the high of 64% who said they did so in 2005. At the same time, reported donations to secular charitable organizations have held steady at or near 75%. The latest results come from Gallup's Dec. 4-11 survey of 1,049 U.S. adults. Gallup has asked Americans about their donations and volunteering for religious and other charitable organizations intermittently since 2001.

Currently, 44% of Americans say they have volunteered for a religious organization within the past 12 months. Volunteering with secular charities has trended up modestly, rising from 43% in 2003 to 51% this year. Unlike the slide in religious donations, the percentage of Americans who report volunteering for a religious organization has increased slightly since 2001, although the rate has been fairly flat since 2005, hovering at or near 43%. Americans' total involvement with religious and secular charities has been steady over the past decade, with more than eight in 10 consistently reporting since 2008 that they donate to a church or other charitable cause and nearly two in three saying they volunteer their time. Longer term, the percentage donating money is down slightly -- from 86% in Gallup's initial measurement in 2001 -- while the percentage volunteering their time has edged up slightly from 60%. Americans with an annual household income of $75,000 or more are perhaps unsurprisingly the most likely to donate to a religious or other charitable cause, with more than nine in 10 (93%) saying they have done so in the past 12 months. An equal percentage of the most highly educated U.S. adults (those with a college degree or postgraduate education) also say they have donated to a charitable cause -- religious or secular -- in the past year.

Highly educated Americans are also most likely to say they have volunteered their time to charitable causes, with more than three-quarters (77%) saying they have done so. About the same proportion of upper-income U.S. adults, 76%, report volunteering. There is a strong relationship between education and income, likely explaining why the two groups report similar levels of charitable activity.

There is little difference among self-identified atheists, Protestants and Catholics in the percentage donating to charitable groups. However, atheists are substantially less likely than Protestants and Catholics to report volunteering their time to charitable organizations. Atheists and Protestants report similar levels of volunteering with secular charities (50% vs. 49%, respectively). However, 85% of atheists say they have not volunteered with a religious charity in the past 12 months, while nearly six in 10 Protestants (58%) say they have.

Donations to religious charities have declined along with Americans' membership in churches and synagogues, but overall charitable activity has been high and steady. This may reflect a strong cultural norm for Americans to help others, not to mention the incentive provided by the tax-free status of many charities. While there has not been a substantial change in the percentage of Americans who say they have donated, it is possible the amounts donated have changed along with the economic times. 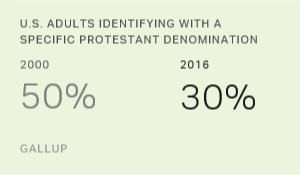