WASHINGTON, D.C. -- As Americans look ahead to 2018, eight in 10 predict it will be a troubled year filled with international discord rather than peace. The public is more optimistic about the economy, with a slight majority anticipating a year of economic prosperity. Americans split evenly on whether U.S. power in the world will increase or decline. The pessimism about the nation's chances for peace in 2018 is likely related to the ongoing conflict with North Korea over its nuclear capabilities, prominent terrorist attacks at home and abroad, and discord with Russia about its possible interference in the 2016 election. The poll was conducted Dec. 4-11, concurrent with President Donald Trump's Dec. 6 announcement that the U.S. would move its embassy in Israel to Jerusalem but before the decision sparked a vote of condemnation at the United Nations.

Optimism about economic prosperity reflects signs that point to a strengthening economy, such as record-high stock prices, low unemployment and Americans' increased confidence in the economy.

While political and economic events shape Americans' predictions for the year ahead, partisanship also plays a role. With the GOP controlling the White House and Congress, Republicans are significantly more likely than Democrats to expect peace, economic prosperity and increased U.S. power in the world in 2018. This is a reversal from the predictions Americans made five years ago for 2013, when Democrats were more optimistic than Republicans during Barack Obama's presidency.

Americans are generally pessimistic about international peace and have been more likely to say that the coming year will be a troubled one, rather than peaceful, in all but one of the 13 times Gallup has asked the question over the past 57 years. The lone exception was the projection for 1960.

Still, the 19% of Americans who expect 2018 to be peaceful is on the low end of Gallup's trend. The only two years when Americans were less likely to expect peace were when they looked ahead to 1966 (11%) during the Vietnam War and to 1980 (14%) in the early days of the Iranian hostage crisis. Economic Predictions on the Higher End of Trend

Americans historically have tended to be pessimistic about economic prosperity when thinking about the year ahead. The 52% of Americans who predict economic prosperity for 2018 is one of only five instances across the 17 times Gallup has asked the question when Americans have been more positive than negative about the economy. However, Americans are less hopeful now than they were at those four other times: in 1965 and 1966 amid a period of economic strength and in 1998 and 1999 during the dot-com boom.

Still, Americans' current economic forecast is relatively bright, considering that optimism on this measure has been as low as 7% -- and that was when Americans were asked about 1974, during the start of a recession and oil crisis. Predictions for U.S. Power in the World Below Average

While about half of Americans (49%) expect the U.S. to increase its power in the world in 2018, this is lower than in 14 of the 17 years Gallup has asked the question. Americans are more optimistic now than they were when making a prediction for 2013, after the attack on the U.S. consulate in Benghazi, Libya. The other exceptions were for 1974 and 1976, as the Watergate scandal was unfolding and during the ongoing energy crisis.

The percentage predicting the U.S. would increase its power in the year ahead rose as high as 84% when Americans looked ahead to 1963, after President John F. Kennedy had successfully defused the Cuban missile crisis. In the context of Gallup's trends, Americans' expectations for the U.S. economy in 2018 are more optimistic than usual, while predictions for international peace and the United States' power in the world are below average. These findings mirror Americans' evaluations of Trump's handling of the economy, which are more positive than their views on his handling of foreign affairs and the situation with North Korea.

Trump and the Republican Party will certainly attempt to use Americans' economic optimism to their advantage heading into the 2018 congressional midterm elections by emphasizing positive economic news. However, key to this approach will be Republican efforts to change Americans' generally pessimistic views of the new tax reform legislation as the law's tax cuts become reality.

Americans' assessments of international peace could, at least in part, be affected by whether Trump can defuse the situation with North Korea, a country Americans have long considered one of the nation's greatest threats. While history suggests it is unlikely that the public would expect a year that is mostly free of international strife, calming tensions with North Korea would likely improve Americans' outlook.

The United States' power in the world could be a sore spot for Trump and the GOP in the year ahead. Americans rated the United States' world standing as the worst in a decade in February 2017. Domestic events such as special prosecutor Robert Mueller's investigation into Russia's alleged interference in the 2016 election could also affect perceptions of the nation's power abroad as the New Year unfolds.

Gallup reviews its top global findings from 2017 based on surveys conducted in more than 140 countries through the Gallup World Poll. 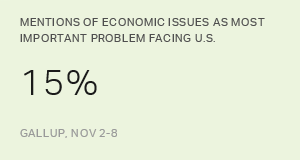