WASHINGTON, D.C. -- Americans' approval of the job Donald Trump is doing as president edged up to 40% for the week ending Feb. 4, from 38% the previous week. Trump's disapproval rating is at 57%.

Background: Trump's weekly job approval average has been just below 40% numerous times last fall and this year, reaching 39% in late December and 38% last week. Although the uptick to 40% is not statistically significant compared with the previous week, the 40% threshold has symbolic meaning. The last time Trump's weekly approval reached the 40% level was May 2017.

The increase last week was coincident with the president's Jan. 30 State of the Union address, in which he touted the strength of the economy and reminded Americans he kept his pledges to cut taxes and reduce business regulations. Although it is impossible to determine definitively whether the address was a factor in the approval ratings uptick, his approval among Republicans did rise to 90%, the highest rating from this group since he took office. Republicans' approval had been at 87% the week before the speech. Democrats' approval remained extremely low at 6% last week, while independents' 33% approval was unchanged.

History shows that it is rare for State of the Union addresses to have a major effect on a president's approval rating, and Trump's approval rating in particular has been resistant to change over the past nine months.

Results for this Gallup poll are based on telephone interviews conducted Jan. 29-Feb. 4, on the Gallup U.S. Poll, with a random sample of 2,228 adults, aged 18 and older, living in all 50 U.S. states and the District of Columbia. For results based on the total sample of national adults, the margin of sampling error is ±3 percentage points at the 95% confidence level. All reported margins of sampling error include computed design effects for weighting. 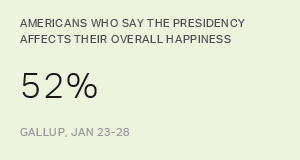 The American public would benefit from more discussion and explanation of four of the major themes in President Trump's recent State of the Union address.