WASHINGTON, D.C. -- President Donald Trump delivered his first State of the Union address Tuesday night. Here is a look at the public opinion context for eight themes that Trump emphasized in his speech:

Since the election, we have created 2.4 million new jobs, including 200,000 new jobs in manufacturing alone. After years of wage stagnation, we are finally seeing rising wages. Unemployment claims have hit a 45-year low. African-American unemployment stands at the lowest rate ever recorded, and Hispanic-American unemployment has also reached the lowest levels in history. Small-business confidence is at an all-time high. The stock market has smashed one record after another, gaining $8 trillion in value. That's great news for Americans' 401(k), retirement, pension and college savings accounts.

Gallup research has found that Americans are exceedingly positive about the current state of the nation's economy. Their satisfaction with the U.S. economy has risen 12 percentage points in the past year, to 58%.

Likewise, Americans' optimism about finding a quality job averaged 56% in 2017, the highest annual average in 17 years of Gallup polling and a sharp increase from 42% in 2016. While Hispanic-Americans were slightly more positive about the job market in 2017 compared with the prior year, African-Americans were more negative, with an average 48% saying it was a good time to find a quality job, down seven points from 2016.

Trump's assertion about small-business confidence is also reflected in the Wells Fargo/Gallup Small Business Index, which earlier this month found a sharp improvement in small-business owners' reports of their revenues.

While Americans are largely in agreement with the president's upbeat description of the economy, they are split on how much credit he deserves for the improvements. Just under half of Americans (49%) credit Trump at least a moderate amount, with 50% crediting him not much or not at all. The public is slightly more likely to give Trump's predecessor, Barack Obama, credit -- 56% think he deserves a great deal or moderate amount of credit, versus 41% not much or none at all.

And just as I promised the American people from this podium 11 months ago, we enacted the biggest tax cuts and reforms in American history. Our massive tax cuts provide tremendous relief for the middle class and small businesses. To lower tax rates for hardworking Americans, we nearly doubled the standard deduction for everyone. Now, the first $24,000 earned by a married couple is completely tax-free. We also doubled the child tax credit. A typical family of four making $75,000 will see their tax bill reduced by $2,000 -- slashing their tax bill in half.

Trump's positive assessment of the sweeping tax reform law passed in late December is not echoed by the American public, although his Republican base generally agrees with him. Gallup polling about the tax law, before and after its passage, shows that a majority of Americans continue to disapprove of it. Overall, 33% of U.S. adults now approve of the law -- including 78% of Republicans, 32% of independents and 6% of Democrats -- while 55% disapprove.

As we rebuild our industries, it is also time to rebuild our crumbling infrastructure. … I am asking both parties to come together to give us the safe, fast, reliable and modern infrastructure our economy needs and our people deserve. … Tonight, I am calling on Congress to produce a bill that generates at least $1.5 trillion for the new infrastructure investment we need.

Trump's appeal to repair the nation's infrastructure is highly in sync with public opinion. Most Americans agree with the concept, even when the high cost is made clear.

Gallup polling during the 2016 campaign found widespread public agreement with spending "more federal money to improve infrastructure, including roads, buildings and waterways." Subsequently, a March 2017 Gallup poll showed similar results: 76% of Americans agreed with enacting "a $1 trillion program to improve U.S. infrastructure, such as roads, bridges and tunnels." There was strong support among Democrats and Republicans for the "trillion dollar" proposal.

Around the world, we face rogue regimes, terrorist groups, and rivals like China and Russia that challenge our interests, our economy and our values. In confronting these dangers, we know that weakness is the surest path to conflict, and unmatched power is the surest means of our defense.

National security has long been considered a strength of the Republican Party, which has outperformed the Democratic Party as best able to keep the country safe from international terrorism and military threats in 13 of the 15 years that Gallup has asked the question, including most recently in September. Further, Gallup polling in June found that 70% of Americans have a great deal or fair amount of confidence in the U.S. government to protect its citizens from future acts of terrorism.

Yet, the public's overall confidence and positive ratings on matters of national security were not reflected in assessments of Trump in November, when 33% of Americans approved of his handling of foreign affairs and 35% approved of his handling of the situation with North Korea. And in response to rising tensions with North Korea, half of Americans said in September that the situation could be resolved with economic and diplomatic efforts, while 45% said it could not. However, a 58% majority favored taking military action against North Korea should economic and diplomatic efforts fail.

For decades, open borders have allowed drugs and gangs to pour into our most vulnerable communities. They've allowed millions of low-wage workers to compete for jobs and wages against the poorest Americans. Most tragically, they have caused the loss of many innocent lives. … The first pillar of our framework generously offers a path to citizenship for 1.8 million illegal immigrants who were brought here by their parents at a young age. … The second pillar fully secures the border.

In June 2017, more Americans said immigrants help the economy by providing low-cost labor than said immigrants hurt it by driving down wages -- 49% vs. 40%. This is a near reversal of views the last time Gallup asked this question in 2005.

In addition, seven in 10 Americans continue to say immigrants take jobs Americans don't want, a view they have held for over two decades. Further, U.S. workers are more than twice as likely to say immigrants have had a positive rather than negative effect on their job, as well as on the company or organization they work for.

Americans show more concern about the effect that immigrants may have on crime, with nearly half (45%) saying immigrants make the U.S. crime situation worse.

Once firmly opposed to supporting a path to citizenship for U.S. residents who were brought to the country illegally as children, Trump has reversed himself, coming into line with public opinion. The vast majority of Americans, 84%, told Gallup in 2016 that they support such a path for those who meet certain requirements over a period of time -- and not just for those who arrived as children, but for "illegal immigrants" more broadly. The same poll found 66% of Americans rejecting the idea of deporting these residents.

Shortly after Trump took office, in April 2017, Gallup found 56% of Americans disagreeing with his proposal to begin construction of a border wall between the U.S. and Mexico -- the highest level of disagreement found for any of the 15 Trump proposals/actions asked about in the poll. Thirty-six percent agreed with building a wall, including 68% of Republicans and 12% of Democrats.

Earlier in 2017, Gallup had found only 26% of Americans saying it was very important Trump keep his campaign promise to build a border wall, ranking 12th out of 13 promises tested.

America has also finally turned the page on decades of unfair trade deals that sacrificed our prosperity and shipped away our companies, our jobs and our nation's wealth. The era of economic surrender is over. From now on, we expect trading relationships to be fair and to be reciprocal. We will work to fix bad trade deals and negotiate new ones.

Americans broadly agree with Trump's goal of making sure any trade deals that the U.S. is party to maximize the country's best interests -- but they appear reluctant to simply pull the plug on existing trade deals.

In February 2017, 71% rated "promoting favorable trade policies for the U.S. in foreign markets" as a very important foreign policy goal. At the same time, the public was closely divided over whether NAFTA has been good or bad for the U.S., and a plurality were unsure about withdrawing from the Trans-Pacific Partnership (TPP). Just 27% agreed with Trump's decision to pull out, while 30% disagreed and 43% had no opinion.

Though Trump has talked tough on trade, he has also championed "fair trade" as economically beneficial for the U.S. Perhaps as a result, the percentage of Americans saying foreign trade is an opportunity for economic growth through increased U.S. exports reached a record-high 72%; just 23% consider it a threat due to increased foreign imports. Positive perceptions of trade are up among all party groups, including Republicans.

For this reason, I am asking Congress to end the dangerous defense sequester and fully fund our great military.

Americans have more confidence in the military than in any other U.S. institution Gallup measures. However, while 45% of Americans say the military is not strong enough, about as many (43%) say U.S. military strength is currently about right.

But it is not enough to come together only in times of tragedy. Tonight, I call upon all of us to set aside our differences, to seek out common ground and to summon the unity we need to deliver for the people we were elected to serve.

Trump's call for bipartisanship likely resonates with the majority of Americans who hold Congress in very low esteem -- and likely echoes their desire for members to do less bickering and more cooperating.

A majority of Americans say they favor political leaders in Washington compromising in order to get things done, rather than sticking to principles even if nothing gets done. This leaning toward compromise is a position that the public has grown more likely to agree with in recent years.

However, Trump faces a bit of an uphill battle among his own base if he follows through and attempts to push bipartisan compromise. Republicans are significantly less likely than Democrats to agree with the compromise position. 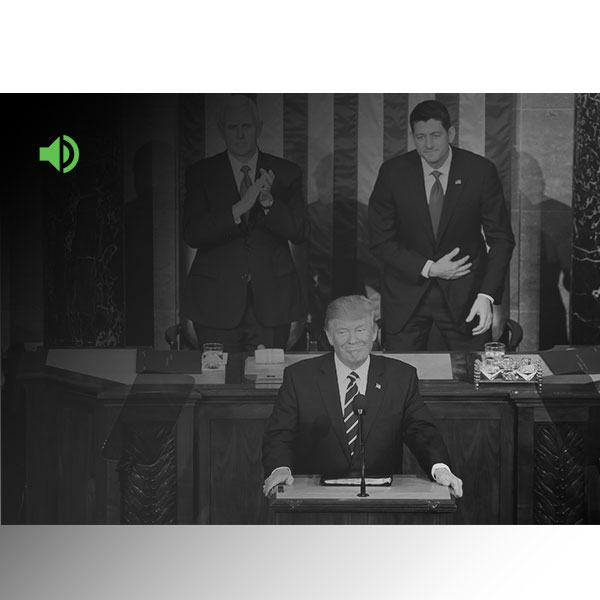 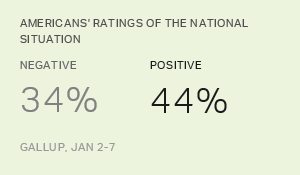