skip to main content
Politics
Americans Split on Whether NAFTA Is Good or Bad for U.S.

WASHINGTON, D.C. -- While President Donald Trump has called the North American Free Trade Agreement (NAFTA) the "worst trade deal in history," Americans are split on whether the deal has been good or bad for the U.S. Forty-eight percent say it has been good for the country, while 46% say it is has been bad. NAFTA has been contentious since its inception in 1994. When Gallup first asked about its effects in 1997, 37% said it was good, 47% said it was bad and 16% had no opinion. The good and the bad figures essentially reversed in the next reading in 2000 and then flipped back again in 2004 -- the last measurement until this year.

The previous times Gallup has asked this question, more than one in 10 Americans has had "no opinion" about NAFTA. Americans may not have firsthand knowledge of how NAFTA has been performing and therefore might rely on news coverage or statements from political leaders to inform their opinions.

NAFTA's future is now uncertain, given Trump's intent to renegotiate its terms with Mexico and Canada.

Perhaps because of Trump's criticisms of NAFTA, fewer Republicans now than in the past say the agreement has been good for the U.S. Twenty-two percent of Republicans now hold this view, down from 40% in 2004 and 46% in 2000. In contrast, 67% of Democrats now say NAFTA has been good for the country, up from 39% in 2004 and 49% in 2000. While there was essentially no gap in Republicans' and Democrats' views of NAFTA from 1997 to 2004, a large partisan divide now exists. The trajectory of independents' views has been similar to Democrats, with their support increasing from 37% in 2004 to 53% now. Republicans are the only party group in which support for NAFTA does not reach a majority level.

Democratic presidential candidate Bernie Sanders also criticized NAFTA on the campaign trail, but it may not have had much of an effect on his younger supporters. Of those aged 18 to 29, 73% say NAFTA has been good for the U.S., the highest of any age group. In contrast, less than half of those in all other age groups support NAFTA.

The same Gallup poll measures Americans' broader views on whether foreign trade is an opportunity for economic growth or a threat to the economy. Naturally, those who are pro-trade are more sympathetic to NAFTA than are those who see foreign trade as a threat.

NAFTA is a complex trade agreement that many Americans may not understand. Economists still disagree on whether it has been effective.

Trump has promised to forge bilateral trade agreements with nations across the globe, but it remains to be seen whether the president will establish separate agreements with both Canada and Mexico. At this point, Americans are divided along predictable partisan lines over NAFTA, though the partisan divide is a recent development. If NAFTA survives -- albeit with Trump's stamp on it -- it is likely that Republican support for the pact will increase. It will be more interesting to see whether Democratic and independent support for NAFTA will decline. 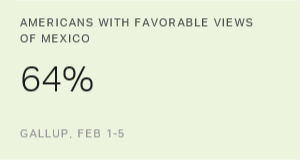 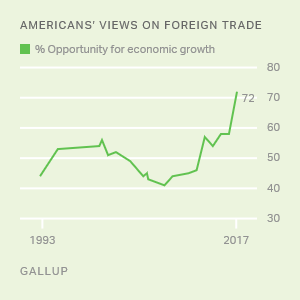