These results are based on interviewing conducted Feb. 1-10, just before Congress passed and President Donald Trump signed into law the new budget bill that increased military spending by $75 billion over the next two years. Americans' attitudes are split almost evenly across three views of the defense budget, with 34% saying the federal government is spending too much on national defense and the military, 33% saying "too little" and 31% saying defense spending is about right.

The percentage of Americans saying the government is spending too little on defense has fluctuated over the 49 years Gallup has asked this question, but those holding the "too little" opinion have been in the minority during that entire period, with one exception. That came in 1981, as Ronald Reagan took office after his defeat of incumbent Jimmy Carter, when 51% said the U.S. was spending too little. That reflected Reagan's campaign promises to dramatically increase spending on defense.

The "too little" percentage reverted to less than 20% for the most of the 1980s and into the 1990s, with a near-record low of 9% saying too little was being spent in 1990, in the second year of the George H.W. Bush administration.

Americans' perception that the U.S. was spending too little on defense rose at the end of the terms of the two Democratic presidents -- Bill Clinton and Barack Obama -- who followed the two Bush presidencies, but has never come near the majority level achieved in 1981.

This year, coincident with the end of Republican Donald Trump's first year in the White House, the proportion of Americans saying too little is being spent on defense slipped to 33% from 37% in the previous two years.

One explanation for the public's views on military spending is that Americans believe the U.S. military is already strong. A separate question shows that about six in 10 Americans say the nation's military is either as strong as or stronger than it needs to be. Thirty-nine percent say it is not strong enough. As was the case for views of military spending, the 39% of Americans saying the military is not strong enough is down from the previous two years. It now matches the average found across the 34 years Gallup has asked the question.

There are predictable partisan differences in views of national defense and military spending. Republicans and Republican-leaning independents are much more likely than Democrats and Democratic-leaning independents to say the nation is spending too little and to say the nation's defense is not strong enough. These Republican attitudes are consistent with the actions of the Republican-controlled Congress and the Republican president as they pushed for the increase in defense spending as part of the new budget.

Republicans' views that too little is being spent on defense are down slightly from the previous two years, helping explain the overall drop in this attitude among the general population. Similarly, Republicans this year have become less likely to say that the military is not strong enough. This shift in attitudes could reflect a Republican belief that with Trump in office, more is being done to strengthen the military. Democrats' attitudes have not changed significantly over the past three years.

Americans hold very positive views of the nation's military, giving it a higher confidence rating than any other institution tested in Gallup's regular confidence in institutions updates. These positive views appear to go hand in hand with the perception that the military is as strong as or even stronger than it needs to be. That in turn is consistent with the public's view that the current level of spending on the military and defense is about right or too high.

Americans' views on these issues are not shared by GOP congressional and military leaders, nor by Trump -- all of whom pressed for the major increase in military spending in the current federal budget.

This leaves a disconnect between leaders and the public they serve. Gallup research conducted last year showed that the significant majority of Americans believe it is important that the U.S. be No. 1 in the world militarily, and this year a separate question shows that barely half of Americans believe this is currently the case. This desire on the part of the public to have the world's dominant military would seemingly help the president and congressional and military leaders defend their decision to increase military spending. At the moment, however, the public does not appear to be convinced that it was necessary to boost the defense budget. 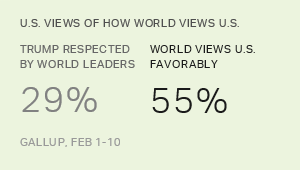