WASHINGTON, D.C. -- Different words used to describe higher education evoke different confidence ratings among U.S. adults. Americans are considerably more likely to say they have a great deal of confidence in "higher education" than in "colleges and universities." Public confidence in "community colleges" and "postsecondary education" falls between these other two terms.

Previous research conducted by Gallup shows a very significant political divide in views of higher education in general. A study by the Pew Research Center found a notable souring among Republicans on colleges and universities.

There are a number of ways to describe higher education, including the term higher education itself, colleges and universities, and postsecondary education. The current study asked random samples of Americans to rate their confidence in education using each term, along with the term community colleges. The study is intended to help understand the extent to which certain descriptors of higher education have -- or have not -- become particularly "charged."

One of the important findings from previous research has been evidence of a significant political divide in views of higher education. This research confirms and extends that previous work. The percentages of Democrats who report having a great deal of confidence in higher education and in colleges and universities are much higher than the percentages of Republicans -- 50% versus 26% for the former and 37% versus 12% for the latter. Of note is the finding that, despite these differences in overall levels of confidence, both Republicans and Democrats are more confident in higher education than they are in colleges and universities. Partisan differences in confidence in community colleges and postsecondary education are considerably smaller.

These same general patterns occur with political ideology, as liberals are more likely than conservatives to have a great deal of confidence in higher education -- 45% to 25%. Both groups are less confident in colleges and universities, though a 13-point liberal-conservative gap still exists.

There are significant differences in views of three of the four terms based on the personal educational attainment of Americans. Americans who report having graduated from college or having postgraduate education tend to be significantly more confident in colleges and universities, higher education and postsecondary education than others.

But there is an exception. Community colleges enjoy consistent support from Democrats and Republicans -- which points to an area of opportunity for policy makers and institutions of higher education to focus on building bridges between political parties regarding higher education investments and policy.

These results reinforce that it's important for institutions of higher education to consider how they describe themselves. Some words are just better to use than others. Another recent example is the evidence that the term "liberal arts" may be a bad brand name -- despite the underpinnings of such an education being as valued as ever.

Results for this Gallup poll are based on telephone interviews conducted Jan. 8-28, 2018, on the Gallup U.S. Poll, with each of the four terms evaluated by one of four random samples of approximately 1,100 national adults, aged 18 and older, living in all 50 U.S. states and the District of Columbia. For results based on each of these samples of national adults, the margin of sampling error is ±4 percentage points at the 95% confidence level. All reported margins of sampling error include computed design effects for weighting. 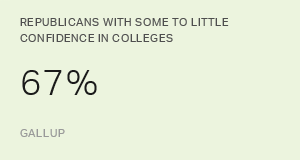 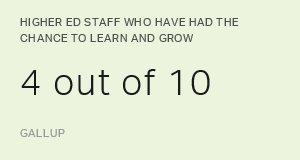