WASHINGTON, D.C. -- Venezuelans are fleeing their country in droves amid the chaos in their government and their streets. More than four in 10 residents (41%) in 2017 said they would like to move to another country permanently if they could. This desire is higher than any figure Gallup has measured since 2008 for the country. Up until 2014, no more than 15% of Venezuelans expressed a desire to leave their country and live elsewhere. Meanwhile, a small majority of Venezuelans say they would like to remain in their country.

These data were collected in the latter half of 2017, between August and November, as violence and hunger overcame the country. During this period, anti-government protesters raided a military base, taking weapons. Meanwhile, many families scavenged for food in garbage bags.

Gallup has tracked Venezuela's descent on a host of measures in recent years. Residents are suffering in their life evaluations, as they have lost a sense of security, faith in their government and the ability to afford food and get quality healthcare.

Venezuelans are likely shocked by the rapid, downward spiral their country experienced in just a matter of years; their country was a powerhouse in Latin America in the 1990s. But a decline in the price of oil, paired with questionable government decisions, sent the national economy into a tailspin -- and with it, residents' sense of stability. Now, many Venezuelans would like to leave the crisis behind them.

Nearly as many, 17%, say they would like to move to the U.S. The current figure is a somewhat muted level of desire to move to the U.S. compared with the past few years. For those who do seek to move permanently to the U.S., this could prove tricky, however, as changes by the U.S. Citizenship and Immigration Service's asylum application process may make it difficult for Venezuelans to seek asylum there.

Among Venezuelans who would like to move, about two in three (64%) name another Latin American country as a desired destination, including Colombia, Chile (12%), Panama (8%) and Ecuador (8%). Many of these countries have made accommodations for Venezuelans entering their country.

Who Wants to Leave?

Among citizens aged 55 and older, less than a quarter (22%) seek to leave the country.

The past several years have been incredibly difficult for Venezuelans. Questionable government decisions have led to a domino-effect crisis that continues to worsen, leaving residents unable to afford basic necessities such as food and housing, and without a sense of security as they walk their streets. Now, many believe they can find better lives elsewhere. And though residents who would like to move skew younger, sizable minorities of older Venezuelans seek to leave their native country as well.

Many have already left for neighboring Colombia, which remains the place most Venezuelans say they would like to go. But their second choice of the U.S. could be problematic given the substantial changes made at the U.S. federal level -- suggesting why the percentage who seek to go to the U.S. is down a bit compared with prior years.

With President Nicolas Maduro running for re-election this spring, a change in leadership could cause many Venezuelans to reconsider a potential move.

Results in Venezuela are based on face-to-face interviews each year with approximately 1,000 adults, aged 15 and older. The Federal Dependencies were excluded due to remoteness and difficulty of access. Some dangerous areas were excluded due to security concerns. The excluded areas represent approximately 5% of the population. For results based on the total samples at the country level, the margin of sampling error is ±4 percentage points at the 95% confidence level. The margin of error reflects the influence of data weighting. In addition to sampling error, question wording and practical difficulties in conducting surveys can introduce error or bias into the findings of public opinion polls. 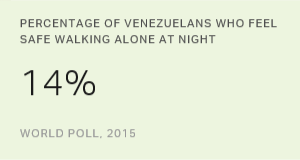