WASHINGTON, D.C. -- If Iran successfully accedes to the Russia-led Eurasian Economic Union (EEU) this May, it will join an economic bloc that -- according to residents in existing member states -- has been largely good for their countries. Since it was established in 2015, residents in the five member countries, Belarus, Armenia, Kyrgyzstan, Kazakhstan and Russia, have been more likely to say the EEU has benefited, rather than harmed, their countries. However, many in these countries are also still unsure.

Iran's entry into the EEU will enlarge the market and could help both Russia and Iran mitigate the effects of U.S.-led economic sanctions against them -- and in turn, potentially help the EEU at large. However, people in Russia, the most powerful country at the center of this union, are typically the least enthusiastic about the bloc. In 2017, one in four Russian adults (25%) said the EEU benefits their country, which is down from previous years. Nearly the same percentage (24%) said it harms their country.

Enthusiasm in the second-richest country in the union, Kazakhstan, is also not what it was at the union's inception. Nearly half of adults in Kazakhstan (47%) in 2017 said the EEU membership benefits their country, down from a solid majority (64%) in 2015. This flagging zeal for the EEU may reflect growing disillusionment with the bloc, which has led Kazakhstan to call for closer integration with both China's Silk Road Economic Belt idea and the European Union.

Adults in Belarus and Armenia, on the other hand, are far more positive about the EEU's impact on their countries than they were when it was established. In Armenia, the percentage who say the EEU benefits their country has more than doubled from 20% in 2015 to 42% in 2017.

Some of these increases are rooted in economic facts. Since Armenia joined the bloc, for example, the country's exports have reportedly increased nearly 50% and in the last year alone, it reportedly saved $60 million on exports to other EEU countries. In Belarus, the percentage who see a benefit from the EEU has risen from 41% in 2015 to a slim majority (51%) in 2017 -- this is despite their government's complaints that relations with Russia have been an obstacle to the country's participation in the EEU.

In Kyrgyzstan, the poorest member of the economic bloc and the one with the most to gain, the public's enthusiasm remains buoyant and stable. In 2017, a majority of residents (57%) said the EEU membership benefited Kyrgyzstan, in line with their attitudes in the past several years.

Three years since the EEU's establishment, residents in existing member states are still, on the whole, more likely to see the association as benefiting their countries rather than harming them. However, not all countries -- including the two largest economies in the bloc -- are as enthusiastic as they once were about the deal. Any further disillusionment could open the doors for other countries such as China -- which has been making inroads in member states -- to challenge Russia's dominance in the region. 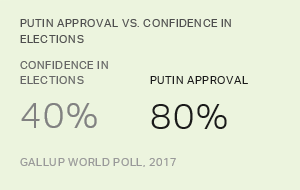 Four in 10 Russians Confident in Honesty of Their Elections

With accusations swirling about their country's alleged meddling in other nations' elections, Russians' confidence in the honesty of their own elections reached a high of 40% in 2017.