WASHINGTON, D.C. -- U.S. investor optimism remains strong and solid in the first quarter of 2018, as the Wells Fargo/Gallup Investor and Retirement Optimism Index pushes into its fifth straight quarter at the highest levels seen in 17 years.

With majorities of investors upbeat about both their personal finances and the overall national economic outlook, the index stands at +139, about where it was in 2017's third quarter (+138) and fourth quarter (+140). The index is 13 points higher than a year ago and 99 points higher than two years ago. Prior to 2017, the index had not been as high as the current score since September 2000. The index is based on results from a survey of 1,321 U.S. investors with $10,000 or more invested in stocks, bonds or mutual funds, conducted Feb. 12-25 during a period of major stock market fluctuations.

The survey includes questions on four aspects of the national economy and three elements of investors' personal finances. At least two-thirds of investors say they are optimistic about each of the three personal finance questions in the index: meeting five-year investment goals, meeting one-year investment goals and maintaining current income. At least 60% are optimistic about three of the four national economic measures -- economic growth, unemployment and stock market performance. On the fourth measure, inflation, 40% of investors are optimistic, with 22% neither optimistic nor pessimistic.

In the past two years, optimism has increased by at least nine percentage points on all of the personal and national measures except inflation and five-year investment goals.

The February survey was conducted shortly after the federal government's monthly labor report showed the economy adding a higher-than-expected 200,000 jobs in January, as the unemployment rate held at its 16-year low of 4.1%. The year-over-year wage growth for January was 2.9%, the best in nearly nine years.

A slight majority of investors (52%) expressed little or no concern about recent volatility in the stock market, even though the Dow Jones industrial average saw major fluctuations in the weeks just before the poll and during the two weeks it was conducted. (The fluctuations have continued through this month.) The Dow suffered its two largest one-day drops ever the week before the survey began, during a market correction that dropped it from a record high of 26,616 to below 24,000. During the two weeks the poll was conducted, the Dow was in recovery, rising from 24,191 to 25,709.

A possible reason why more than 50% of investors show little concern about the market's volatility in January and February may be found in their tolerance for losses. Fifty-three percent say they could tolerate declines of 10% or more in a $10,000 investment over the course of a year, including one in five who say they could tolerate a loss in value of 20%.

On the fundamental question of whether the market is a good place to save and invest for retirement, investors are split. Forty-nine percent have either a great deal (16%) or quite a lot (33%) of confidence, and 48% have little (41%) or none (7%). In the five times the question has been asked since November 2012, the previous high expressing confidence was 43% in November 2015. Investors are more confident in the financial markets overall, with 60% saying now is a good time to invest, up from 49% two years ago.

The Wells Fargo/Gallup Investor and Retirement Optimism Index is currently both stable and solid.

Investors are already facing new challenges, with recent days bringing new volatility to the stock market amid fears of trade wars. But, as seen in their responses to the survey questions and in their current market activity, investors are remaining resilient and generally confident that the financial markets are still a good place to put their money. 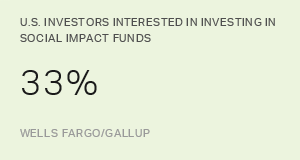 Most U.S. investors know little, if anything, about the concept of "social impact investing," but a third are at least somewhat interested in investing in these funds. 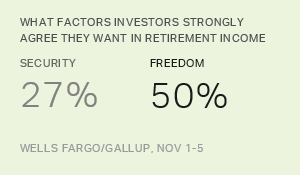 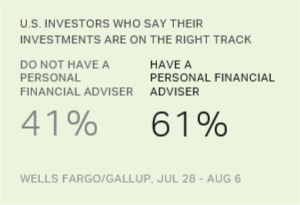