WASHINGTON, D.C. -- A majority of U.S. Facebook users (55%) are "very concerned" about their personal information being sold to and used by other companies and organizations. This issue tops a list of seven concerns Gallup asked Facebook users about as the company's CEO Mark Zuckerberg prepared to testify before Congress about efforts to protect users' data and privacy.

It's likely that Facebook users' concerns about their information being exploited by other companies are heightened after the recent Cambridge Analytica scandal, which prompted Zuckerberg's congressional testimony. The data firm violated Facebook's policies when it harvested an estimated 87 million users' personal data to potentially influence political outcomes in the U.S. and elsewhere. A majority (56%) of Americans report having a Facebook page, the criterion the survey used to define Facebook users.

These findings are from an April 2-8 Gallup survey that also updated Facebook users' concerns about invasion of privacy by the social media site, more generally. The percentage very concerned about this is now 43%, up from 30% in October 2011.

About a third of users report this high a level of concern about internet viruses (36%) and unsolicited messages or ads sent through spam email or appearing on their page, usually to try to sell them something (33%). Concern about targeted ads is also higher today than in 2011, while concern about viruses matches a January 2011 reading.

Meanwhile, 13% are very worried about spending too much time on Facebook. But about two in three users (68%) are not too concerned or not concerned at all about doing this.

For comparison, the survey asked many of the same items of Google users, defined as those who use Google in a typical week (74% of Americans say they do so). A majority of Google users are very concerned about their personal information being sold (57%), topping a list of five concerns Gallup polled about. The level of concern among Google users about having information sold is similar to what it is among Facebook users.

Users are least worried about Google sending them targeted ads based on their web browsing history, with 26% very concerned.

With more than a billion daily active users worldwide, Facebook has become a treasure trove for companies and organizations that seek to use the social networking site's data for their business and political aims.

With a majority of U.S. adults using the service in 2018, Zuckerberg faces an enormous challenge to assuage this population's concerns about its personal information being sold and used. Though the Cambridge Analytica scandal resulted from a data leak rather than from Facebook selling the data directly to the firm, the incident legitimized the concerns many users have long had about what could be done with their information and online activity. Concerns about their personal information, as well as about invasion of their privacy, top all other worries they have about the site -- including internet viruses, spam and their interactions with others.

Though Facebook is currently in the hot seat on Capitol Hill, other platforms such as Google face similar challenges, with their users also concerned about how their personal information is being used. While American users may express concern, the reality is that these sites rely heavily on data about users' activities and behavior. How they balance their operations with their efforts to safeguard and respect users' data may be key to their long-term viability. 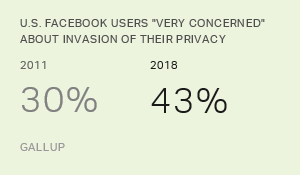 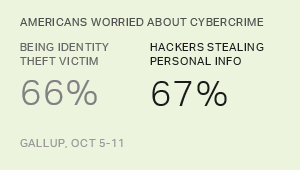 Two-thirds of U.S. adults worry "frequently" or "occasionally" about becoming a victim of cybercrime, and they report being victimized by this type of crime more often than by conventional crime.