WASHINGTON, D.C. -- Americans' long-standing tilt toward preferring a boy over a girl if they could have only one child continues. Thirty-six percent of Americans say they would want a boy and 28% a girl, with the rest -- 36% -- volunteering that it wouldn't matter or that they don't have an opinion. Men's preference for a boy this year remains substantial but is slightly diminished, with the 19-point gap the lowest since 1990. The largest gap among men was in 2000 -- when 55% said they would prefer a boy and 18% a girl. Preferences among women in the current survey are essentially tied, with 31% opting for a girl and 30% for a boy. The highest preference for a girl over a boy among women was seven points, registered in 1990 and in 1996. Youngest Americans Strongest in Their Preference for Boys

Americans who are college graduates and those who have postgraduate education are essentially neutral in their preferences, with about the same percentages wanting a boy as wanting a girl. Those with some college and with a high school education or less have a stronger preference for a boy, including a 17-point gap among the latter group.

These same differences by age and education were evident in 2011, the last time this trend was updated.

Americans' preferences for male or female children have been evident for decades, with slightly more than a third indicating they have no preference, but with those who have a choice preferring boys over girls. This "boy preference" is largely because men would rather have boys.

Some academic research has focused on the potential impact of these attitudes, exploring whether parents with only male or female children would be more likely to have additional children -- in the hopes of having a child of the other sex -- than those who already have both boys and girls.

There is mixed evidence that this is the case, however. Gallup research conducted 11 years ago asked those with a preference to explain it in their own words, and found some mentions of the existing sex composition of families as a reason. But recent studies of demographic data have shown little sign of a relationship between family composition and having more babies. A New York Times report on this research headlined, "Americans Might No Longer Prefer Sons Over Daughters," reflects the conclusion that the boy baby preference might no longer exist based on analyses of childbearing behavior.

Regardless of what studies of actual childbearing may show, the current Gallup data show that the underlying attitudinal preference for a boy over a girl, although modest, continues to be a norm in U.S. society.

As the ability to manipulate genes and create "designer babies" with specified characteristics (including sex) becomes more of a reality in the decades ahead, the desire to have children of a certain sex could become more of a direct factor in determining fertility patterns.

General attitudes toward childbearing and the ideal number of children will be explored in forthcoming Gallup reports. 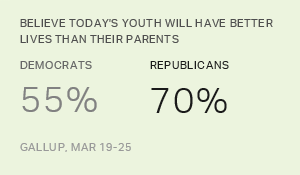 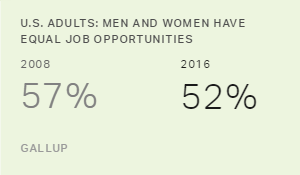