WASHINGTON, D.C. -- Americans' approval of the job the U.S. Congress is doing remains mired at 17% in August. Congressional approval has been relatively stable since January, fluctuating between 15% and 20% during that time. The latest rating comes from a Gallup survey conducted Aug. 1-12. August is normally an uneventful month for Congress because it's when the legislative body traditionally breaks for summer recess. However, Senate Majority Leader Mitch McConnell canceled the break this year to work toward the passage of spending bills that would avert a government shutdown.

In February of last year, after Donald Trump's inauguration, congressional job approval rose to 28%. However, that increase was short-lived, and by last April, Americans' views of Congress had fallen back to levels near those before Trump took office. Since then, no more than 21% have said they approve of the job Congress is doing, with approval dropping as low as 13% last fall, when Republicans were debating tax reform legislation.

The current 17% approval rating is about average for congressional approval over the past 17 months but below the overall average of 30% since Gallup began tracking the public's views of Congress.

Republicans continue to give Congress higher marks than do other partisan groups. The 28% of Republicans who approve contrasts sharply with Democrats' 7% approval. Independents' approval, at 17%, falls in between the ratings of the two major party groups. 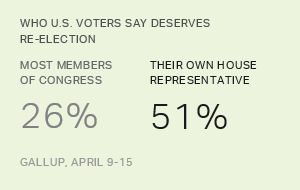 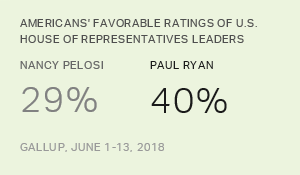