skip to main content
Business
More U.S. Commuters Get to Work Without Cars Than in Past

WASHINGTON, D.C. -- The vast majority of American workers remain reliant on cars to get to work, but not as many as a decade ago. In 2007, 85% of Americans drove themselves to work and 6% rode with someone else. But by 2018, while the 6% of Americans who carpool has remained constant, there has been a decrease in the percentage of those who drive themselves to work, edging down to 77%. Meanwhile, the minority of Americans who employ alternative ways of getting to work -- mass transportation, walking, biking, working remotely or "something else" -- has grown, from 9% in 2007 to 16% today.

These data are from Gallup's Work and Education poll, conducted Aug. 1-12.

The decrease in those driving themselves to work has been accompanied by small, two-percentage-point upticks since 2007 in the percentages of U.S. adults who ride mass transportation, walk to work, or telecommute or work from home. One percent of Americans now say they bike to work.

Americans' Commutes Haven't Gotten Any Shorter Over the Past Decade

Gallup also asks U.S. workers the total time they spend each day commuting to and from work. Currently, Americans who commute to work report an average round-trip time of 52.4 minutes. In 2007, it took commuters an average of 48.1 minutes to get to and from their jobs. Though the four-minute increase from 2007 to 2018 is not statistically meaningful, the U.S. Census Bureau has found a similar increase over that time.

For perspective, if a commuter who works five days a week for 50 weeks each year experienced an increase of one minute to their daily commuting time, that would translate to more than four additional hours spent commuting each year.

U.S. commuters do not report any change in the amount of stress from these daily trips to work.

The current 21% of American workers who say their commute to work is "very" or "somewhat" stressful is similar to the 24% recorded in 2007. Meanwhile, a small majority (53%) of commuters say their commute isn't stressful at all -- and this figure hasn't changed since 2007.

The level of stress one's commute causes them is predictably related to how long it takes. Workers who spend an hour or longer commuting each day are more than three times as likely to describe their commutes as very or somewhat stressful as are workers whose commutes total 59 minutes or less.

Additionally, where a commuter lives plays a role in how stressful their trips to and from work are. Few workers in towns or rural areas describe their trips as very or somewhat stressful (11%), while commuters in cities (24%) and suburbs (29%) are more than twice as likely to report this level of stress.

As the number of cars on U.S. roads continues to grow, more workers have apparently found alternative ways of getting to work, such as using mass transit or telecommuting instead of working on location. Still, cars remain the dominant mode of commuter travel in the U.S.

But despite changes in how Americans get to work, their commute times haven't gotten any shorter, and long commutes could impact their well-being. Though overall commute-related stress has not increased by a meaningful amount over the past decade, workers with longer commute times are more likely to say their trips are stressful. This fits with other Gallup workplace research showing that Americans with longer commutes are more susceptible to physical ailments, such as neck and back pain, high cholesterol and obesity. Workers with longer commutes are also more likely to experience worry and less likely to experience enjoyment or feel well-rested. However, engaged employees with such long commutes weather these negative impacts better than disengaged workers do.

Employers may want to find ways to help commute-related and other kinds of stress, which could ultimately drive their workforce engagement as well as the company's overall financial performance.

Results for this Gallup poll are based on telephone interviews conducted Aug. 1-12, 2018, with a random sample of 533 adults employed full or part-time, aged 18 and older, living in all 50 U.S. states and the District of Columbia. For results based on the total sample of employed adults, the margin of sampling error is ±5 percentage points at the 95% confidence level. All reported margins of sampling error include computed design effects for weighting. 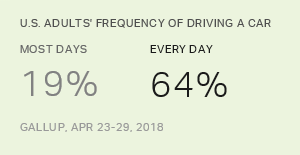 Although 83% of U.S. adults drive a car or other vehicle at least several times a week, just one-third say they enjoy driving a great deal.

Snapshot: Who Uses Ride-Sharing Services in the U.S.?

Three in 10 Americans use a ride-sharing service such as Uber or Lyft. Young, urban and upper-income Americans are among the most likely to use the services. 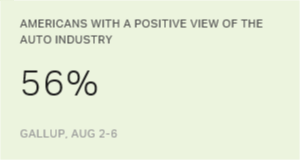