WASHINGTON, D.C. -- Government statistics indicate that opioid overdoses in the U.S. continue to be responsible for more than 100 deaths every day, but Americans are slightly more likely now than they were last year to say the U.S. is making headway in coping with illegal drugs. Nearly four in 10 Americans (38%) say the U.S. is making at least some progress in tackling the problem of illegal drugs, up six percentage points from a year ago.

The latest results are based on Gallup's annual Crime poll, conducted Oct. 1-10, shortly after Congress passed sweeping legislation meant to prevent opioid addiction and help those who are addicted. The final bill, which President Donald Trump signed into law on Oct. 24, received broad bipartisan support and could explain the bump in the public's view that the nation is making progress. Additionally, a number of states have passed legislation aimed at tackling the opioid epidemic, and those actions may be influencing Americans' views.

Gallup's question asks broadly about "illegal drugs," but given the magnitude of the opioid crisis in the U.S., it is likely that opioids are one of the top drugs Americans think of when they hear the term "illegal drugs." Last year, more than 72,000 people in the U.S. died from drug overdoses, and opioids were involved in about two-thirds of those deaths. Since 2013, opioids have nearly doubled as a cause of overdose deaths, but government data suggest that opioid overdose deaths may have begun leveling off in the latter part of 2017.

Although members of both parties were able to come together in passing legislation to address the opioid epidemic, rank-and-file partisans are far apart in their views of the progress on dealing with illegal drugs. As with many issues today, the political polarization on this issue is wider than ever. With a Republican in the White House, Republicans and Republican-leaning independents (55%) nationwide are twice as likely as Democrats and Democratic-leaning independents (27%) to say the nation is making progress. Throughout the trend, partisans from the sitting president's party have been more likely to say the U.S. is making progress, but the current 28-point gap is by far the largest historically and much greater than last year's 13-point gap.

Americans' views of the seriousness of the illegal drug problem -- both in the U.S. and in the area where they live -- have been quite stable dating back nearly two decades. Currently, 69% say illegal drugs are an "extremely" or "very" serious problem in the U.S. and 31% say the same of the area where they live. This is consistent with a general trend Gallup has found in which Americans tend to rate their personal situations better than the country's. Although a stable majority of Americans agree that the problem of illegal drugs in the U.S. is serious, the percentage who see some progress in the nation's battle against it has increased slightly. With Congress and individual states working to combat the nation's deadliest drug epidemic in U.S. history, Americans may be starting to see results, and government statistics indicate that the number of deaths caused by opioid overdoses was plateauing at the end of 2017. Trump has made the issue a priority, and while rank-and-file Democrats are less willing to concede that there has been progress, Republicans are fully in Trump's corner. 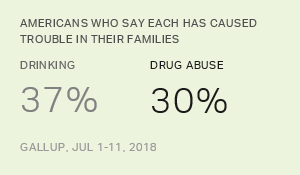