WASHINGTON, D.C. -- Sixty percent of Americans oppose major new construction of walls along the U.S.-Mexico border -- the goal behind President Donald Trump's budget showdown with Democratic leaders that led to a record 35-day partial shutdown of the federal government.

The shutdown, which ended Jan. 25, and the political battles that preceded it over the past several months have had little apparent effect on public opinion about a wall. Fifty-seven percent opposed major new construction of walls seven months ago, a statistically insignificant three-percentage-point difference from the current number.

Gallup trends offer several signs that immigration has risen in prominence as a national issue in the past year:

The issue of a wall was proposed as a way to slow illegal immigration long before Trump made it his signature 2016 campaign pledge. Gallup has asked about it using various question wordings, but all polls have shown a majority opposed. Gallup first asked about it in 1993, when 71% said they opposed "erecting a wall along the border with Mexico." Opposition eased slightly in 1995, when 62% were against erecting a wall. In 2006, opposition to "building a wall along the border with Mexico" was 56%.

Public opposition to a border wall had increased by 2016, when Trump was pushing construction of the wall. Sixty-six percent opposed "building a wall along the entire U.S.-Mexico border" in June of that year.

Clear majorities of U.S. adults in the latest poll support two other actions related to immigration, while rejecting a third.

Since Trump's election, the proportion of Americans wanting to increase immigration levels has grown -- from 21% in June 2016 to a record-high 30% now.

The percentage of Americans who want immigration levels decreased has been higher than those wanting it increased in every one of the 33 polls Gallup has conducted on the issue since 1965. However, the current one-point gap ties with the June 2018 poll for the smallest ever. Before Trump's election, the percentage preferring a decrease in immigration averaged 31 points higher than the percentage wanting an increase. Republicans, including independents who lean toward the Republican Party, are slightly more likely to favor increasing immigration levels now (16%) than they were in 2016 (11%), but about half (51%) want levels decreased. During the same period, support for increased immigration has risen more among Democrats and Democratic-leaning independents, from 31% to 41%, with only 13% wanting to decrease levels.

As a House-Senate conference committee begins discussions on resolving the fight over immigration spending and Trump's border wall, there is little question of where public sentiment stands on such key issues as expanding border walls, treatment of immigrants already in the U.S. illegally and increasing the number of border patrol agents.

Most of the cards at this point seem to be in the hands of the Democratic negotiators, fresh off their victory over Trump on the government shutdown faceoff. The public is solidly against the expansion of the border walls and remains sympathetic toward immigrants in the country illegally. Both of these views seem to match previous Democratic proposals at a time when Republicans are unable to agree on how to handle immigration. Therefore, it is not hard to envision an outcome that will please far more Democrats than Republicans. 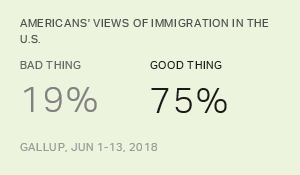 Immigration Up Sharply as Most Important U.S. Problem

Americans' mentions of immigration as the nation's most important problem have surged to 21%, nearly tying the record high for that issue and edging out the government for the top spot.