WASHINGTON, D.C. -- U.S. small-business owners are less optimistic about business conditions now than they have been over the past year. The Wells Fargo/Gallup Small Business Index, which measures small-business owners' attitudes about a wide variety of factors affecting their businesses, is down to +106 in Quarter 1, 2019, from the record high of +129 set in Quarter 4, 2018. The current drop erases the gains in confidence seen in the last two quarters of 2018 and returns the index to where it was from Quarter 3, 2017, through Quarter 2, 2018. The current survey of small-business owners was completed Jan. 9-15, 2019 -- during the partial government shutdown. This quarter's decline was fueled by a drop in items related to small-business owners' optimism about their current financial situation, as well as a drop in their overall future expectations. Additionally:

The survey also explored small-business owners' views of their preparedness should there be an economic downturn or recession.

Owners are generally optimistic about their ability to weather new economic problems. More than three-quarters of owners (77%) reported being either "very" (25%) or "somewhat" (52%) prepared to handle a downturn.

Nearly seven in 10 owners reported owning their business 10 years ago during the recession. Among this group, 75% said they were better prepared if an economic downturn occurs now than they were over 10 years ago.

Asked what lessons they learned from the experience of living through the previous recession, owners were most likely to say they were more careful and more frugal with their business in terms of spending and credit (19%). Other owners cited the need to build up savings or capital in reserve (12%), anticipatory planning should a recession materialize again (9%), and keeping the business viable by focusing on growth, customer service and staying competitive (8%), Amid a government shut-down, small-business owners' financial optimism has declined significantly from the high points reached last year, although optimism is still well above the levels measured in the years during and after the recession. Despite the continued health of the economy based on government indicators, owners this quarter are significantly less likely than previously to give positive ratings to their revenues and cash flow.

Investors Concerned but Not Pessimistic About Stocks

Sixty-one percent of U.S. investors are concerned about stock market volatility, but more are optimistic (49%) than pessimistic (28%) about the market's performance in the coming year. 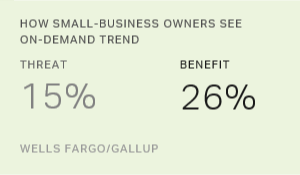 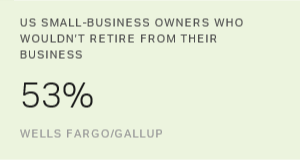