WASHINGTON, D.C. -- Americans' perceptions of race relations have changed little since 2016. White and black Americans diverge in their opinions on the quality of relations between various racial and ethnic groups. Americans are generally positive about relations between racial groups, but much less so about black-white relations.

Interestingly, there is a noticeable difference between black vs. white views on relations between groups. Black Americans tend to rate relations between themselves and whites, as well as relations between whites and Hispanics, more negatively than either whites or Hispanics do. In fact, in both of these comparisons, blacks clearly differ from the other two groups.

Before 2015, there was over a decade during which more than six out of 10 Americans described relations between whites and blacks as very or somewhat good. However, since 2015, fewer Americans on average have held that view. In the most recent polling, from November and December 2018, just over half of Americans (51%) have a positive view of black-white relations, while 47% say relations are either very or somewhat bad, only modestly better than in 2015. These data coincide with a more racially charged political environment around the country and a stream of high-profile police-related incidents resulting in the killing of black men, often by white officers. The latest of these occurred Nov. 12 in Chicago, just days before the Nov. 19-Dec. 22 survey went into the field.

Yet the data at the national level disguise clear gaps between blacks and whites, in both their assessments of the current state of black-white relations and their optimism for eventual improvement.

The latest poll marks the first time that more than half of black respondents have assessed black-white relations as somewhat or very bad. As late as the summer of 2013, most black Americans continued to give a more positive than negative assessment of the state of black-white relations in the U.S. And, less than a year after the terrorist attacks on Sept. 11, 2001, 68% of black respondents assessed race relations in the country between whites and blacks as very or somewhat good. At that time, essentially the same percentage of whites, 70%, gave the same rating. Now, the two racial groups' ratings of black-white relations diverge by 14 points; whites' opinions have improved since 2015, while blacks' have gotten worse. Most Remain Optimistic for Better Future

Notably, the 1990s remain the most pessimistic decade on black-white relations in the U.S.; at that time, majorities consistently predicted that such relations would always be a problem for the country. This period coincided with racially charged events that captured the nation's attention, such as the L.A. race riots and the O.J. Simpson trial.

Yet, similarly to assessments of current race relations, the lack of change in expectations nationally masks a noticeable variance between white and black respondents. Most blacks (53%) say relations between blacks and whites will always be a problem, while 38% of non-Hispanic whites share this view. Immediately after the election of the first black U.S. president, Americans' optimism about the future of black-white relations soared. However, since 2013, Americans' overall positive perceptions on race have cooled, and perceptions among blacks have soured considerably. This period of decline has witnessed high-profile police shooting incidents involving black citizens, a neo-Nazi rally and ensuing violence in Charlottesville, Virginia, and racially charged attacks on a black house of worship in Charleston, South Carolina. All of these events captured the national attention and have kept the challenge of race relations at the forefront of Americans' minds. 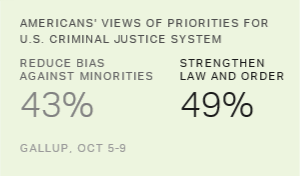 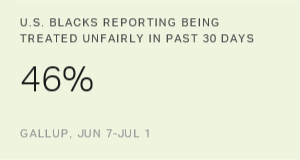