skip to main content
Politics
Gallup First Polled on Gay Issues in '77. What Has Changed?

This article is the first in a monthlong series on Americans' views about LGBT issues. Gallup will release new findings every Thursday in June. Gallup's trends, including some extending back four decades, can be found here.

WASHINGTON, D.C. -- Gallup first polled Americans about gays and lesbians in 1977 -- when the U.S. gay rights movement was still in its infancy, and openly gay politician Harvey Milk was elected to the San Francisco Board of Supervisors. Gay rights activists at the time enjoyed momentum from the 1969 riots at Stonewall Inn in New York City -- an uprising against police raids on gay bars, the 50th anniversary of which the LGBT community celebrates this month -- and had not yet endured the AIDS crisis that would later kill many LGBT people.

But while the movement was young and hopeful at the time, Americans held very different views about gay people than they do today. In many states at the time, same-sex intimacy was an illegal offense for which one could be imprisoned. Americans were evenly split on the question of whether gay and lesbian relations between consenting adults should be legal (43%) or illegal (43%). But today -- many years after the Supreme Court's 2003 Lawrence v. Texas decision that prohibited states from outlawing them -- the vast majority, 83%, say gay relations should be legal.

Only a small minority of U.S. adults in 1977 (14%) believed that gay people should be allowed to adopt a child. This figure is more than five times higher in 2019, with 75% supporting gay adoption rights.

Today, nearly all Americans (93%) say gay people should have equal employment opportunities, whereas a small majority (56%) felt this way in 1977, when it was a hot issue in state and local politics. That year, the anti-gay Save Our Children campaign was launched by singer Anita Bryant, who used her celebrity to advocate against local ordinances banning discrimination against gay people in employment. The campaign was successful in overturning employment anti-discrimination ordinances in cities across the country.

Today, eight in 10 or more Americans support hiring gay people for each of these jobs -- with the exception of clergy, which 72% say is a profession gay people should be considered for. Since its first questions on the topic in 1977, Gallup has gone on to ask dozens of questions about LGBT people and their rights -- changing question wordings over time as national understanding of the issues has evolved, adding new questions about transgender and other emerging issues, and polling about LGBT acceptance internationally since 2005.

Key legal and societal changes on LGBT issues have taken place in the U.S. over this time as well, and Americans' views on these issues have undergone some of the most dramatic shifts in public opinion -- including gay marriage, which hardly even registered as a goal for gay rights activists of the 1970s. But while LGBT rights advocates can count many victories in recent decades as they celebrate the 50th anniversary of the Stonewall riots, there are still areas where activists seek change. As Americans' views on gay employment rights have changed quite a bit, the U.S. Supreme Court is preparing to hear cases of employment discrimination and will decide whether a federal civil rights law applies to gay and transgender people. 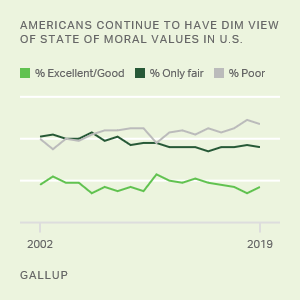 The Religious Left Has a Numbers Problem

Pete Buttigieg raised the possibility of a "religious left" in the coming presidential election, but relatively few liberals or Democrats are highly religious.