BANGKOK -- After the country's 2014 coup d'état, Thailand's economy seemed to recover with GDP growth rising from 1% in 2014 to 4.1% in 2018. However, since 2016, the numbers of Thais who are struggling to afford the basics have remained elevated, particularly among the poorest Thais. In 2015, Thailand was one of the countries in Southeast Asia with the lowest percentage of people who were struggling to afford food -- at just 15%. Only Singapore, at 5%, had a lower percentage. The picture looked markedly different three years later. Thais are now more likely to be struggling to afford food than their regional neighbors in Singapore (6%), Vietnam (19%) and Malaysia (29%).

While Thais in both the highest and lowest income groups are more likely to be struggling to afford food than they were just a few years ago, the inequality between the two groups has become a chasm. Since 2016, Thais in the poorest 20% income group have been about twice as likely as those in the richest 20% income group to report struggling to afford food. In the most recent measure, 54% in the poorest 20% said this was the case, compared with 27% in the richest 20%.

At a minimum, this suggests that not all Thais have benefited from the increasing GDP growth in these years. Moreover, as GDP growth is starting to decline, it is more worrisome for the poorer segments of the Thai population.

However, instead of losing favor among the poorest Thais, the government has lost confidence among those in the richest 20% of the population. The data suggest that headed into an extended period of a potential economic slowdown, the national government will need to acknowledge the large percentage of Thais who are struggling to meet their basic needs, and allocate resources and opportunities to mitigate the inequality.

These results are based on face-to-face interviews with 1,000 adults, aged 15 and older, conducted in Thailand from May-August 2018. For results based on the total sample of national adults, the margin of sampling error is ±3.8 percentage points at the 95% confidence level. The margin of error reflects the influence of data weighting. In addition to sampling error, question wording and practical difficulties in conducting surveys can introduce error or bias into the findings of public opinion polls. 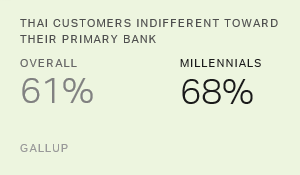 Banks in Thailand are struggling to engage customers -- especially millennials -- amid rapid economic and technological changes.

Developing countries in Asia that derive much of their GDP from exports to the West have been especially hard hit by the global downturn. Even so, citizens in those nations remain confident in their governments and financial institutions.