WASHINGTON, D.C. -- As U.S. children head back to classrooms amid another COVID-19 surge, 73% of parents of school-aged children say they are satisfied with the quality of education their oldest child is receiving. Twenty-eight percent of parents are "completely" and 45% "somewhat" satisfied, which is essentially unchanged from one year ago when satisfaction fell after the pandemic forced schools to close to in-person instruction. 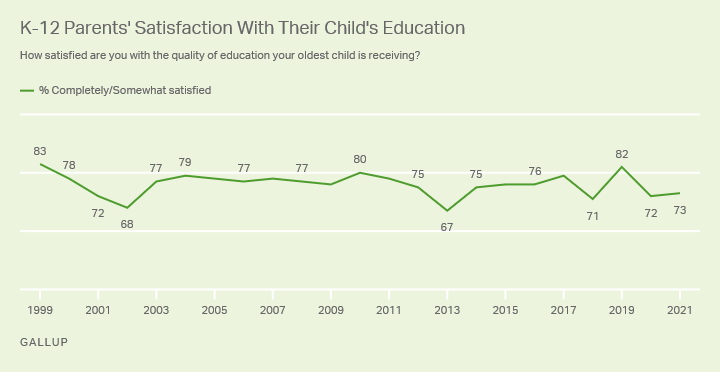 Gallup has tracked parents' satisfaction with the education received by their students in kindergarten through high school annually since 1999 when a record-high 83% were generally positive. Since then, satisfaction has averaged 76%, with a recent high reading of 82% in 2019. The latest 73% satisfaction, from an Aug. 2-17 poll, is at the low end of the historical range and comes as the highly transmissible delta variant is causing a surge in COVID-19 cases and hospitalizations in the U.S. Unvaccinated Americans, including all children under the age of 12, are at a higher risk of contracting COVID-19.

At the start of the last school year, before any vaccines were available, Gallup data showed a significant decrease in public school attendance and an increase in home schooling, based on parent reports of the type of school their oldest child attends. "Home schooling" is defined for respondents in the survey as "not enrolled in a formal school but taught at home." However, the latest data shows home schooling has fallen from 10% in 2020 to 4% now, thereby returning to the pre-pandemic level, while public schooling has rebounded to 83%.

The low point in overall satisfaction was 36% in 2000 when education was a key issue in the U.S. presidential election. The 53% high point in satisfaction was in 2004 as Republicans were overwhelmingly positive about the results of President George W. Bush's "No Child Left Behind" education reform law in his reelection year. 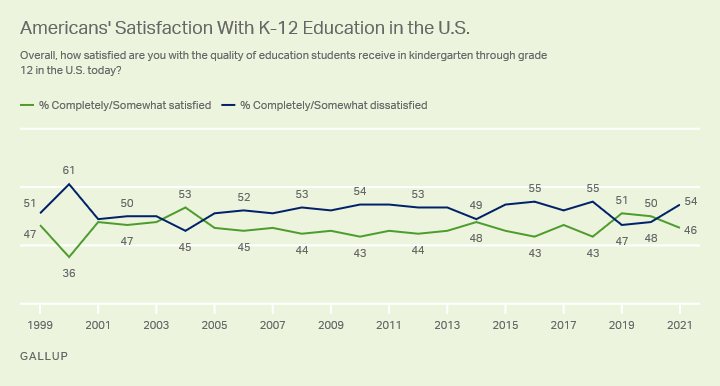 Line graph. Americans' satisfaction with the quality of education U.S. students in grades kindergarten through twelfth grade receive since 1999. Currently 46% of Americans are completely or somewhat satisfied and 54% are somewhat or completely dissatisfied.

Satisfaction with K-12 education in the U.S. has edged down or remained steady since 2019 among nearly all key demographic subgroups. The one exception is Democrats, among whom satisfaction has risen from 50% in 2019 to 63% this year. Although partisans have not always differed significantly in their satisfaction with primary and secondary education, there have been other instances of partisan divergence. Specifically, this was the case at the start of the presidencies of George W. Bush, Barack Obama and Donald Trump, when party loyalists became more likely to express satisfaction.

In addition to the current disparities among partisans, satisfaction among Americans in several other demographic subgroups -- including gender, age and income -- is markedly different. Women, older adults and lower-income Americans are more likely than their counterparts to say they are satisfied with K-12 education. Meanwhile, there are no significant differences by parental status or educational attainment.

This is the second school year that is starting during the coronavirus pandemic, and administrators continue to face significant challenges in keeping students safe while making sure they meet their academic milestones. Some K-12 students are only now resuming a full-time school schedule, and others are returning to classrooms for the first time since March 2020.

While there has been great debate about the appropriate protocols to follow to limit the spread of COVID-19 in schools, there is broad agreement among educators and public health officials and political leaders on both sides of the aisle that children learn better and are mentally and emotionally healthier when they are learning in classrooms rather than remotely. The Centers for Disease Control and Protection and American Academy of Pediatrics have stressed the importance of prioritizing in-person instruction for K-12 students this school year.

Parents' satisfaction with their child's education is likely tied to a combination of factors, including academic rigor and support from teachers and administrators, but in this age of COVID-19, limiting exposure to it is probably also on the list. How well administrators and teachers ensure students are academically on track and healthy both physically and emotionally will likely play into parents' satisfaction with their education in the near future.

Results for this Gallup poll are based on telephone interviews conducted Aug. 2-17, 2021, with a random sample of 1,006 adults, aged 18 and older, living in all 50 U.S. states and the District of Columbia. For results based on the total sample of national adults, the margin of sampling error is ±4 percentage points at the 95% confidence level.

For results based on the total sample of 224 parents with children in kindergarten through grade 12, the margin of sampling error is ±8 percentage points at the 95% confidence level. All reported margins of sampling error include computed design effects for weighting.