The percentage of Americans who get a COVID-19 vaccine is directly related to important pandemic outcome metrics -- cases, hospitalization and deaths. This, in turn, makes vaccine hesitancy (or vaccine refusal as some now call it) one of the most important public health issues facing the nation. Americans' hesitancy to get vaccinated is dictated to some degree by practicality -- vaccine availability, proximity of the vaccination site to home and work, and the ability to find time to get vaccinated. But hesitancy, at its base level, is a personal decision reflecting individual thinking and decision-making processes.

Few Americans can access and understand the medical and scientific literature on either the virus itself or the vaccine's efficacy. This means Americans end up making decisions based on exposure (or lack of exposure) to information they glean from friends and relatives, the media they use, and more generalized information from trusted associates and leaders. All of this is filtered through existing cognitive processes that provide context for how individuals perceive the world around them.

Gallup has looked at Americans' views on the vaccine in a number of different ways over the past year, including a recent review of data by my colleague Jeff Jones and my detailed look at the impact of partisanship on vaccine hesitancy. The U.S. government and numerous other polling organizations have generated a great deal of additional data assessing Americans' mindset about the virus and vaccination.

The CDC estimates that 69% of adults 18 and older have had at least one vaccine shot and that 60% have been fully vaccinated. Gallup and other survey organizations measure the attitudes of the 18+ population in surveys and end up estimating that between 14% and 26% of Americans say they have not been vaccinated and will not be vaccinated in the future (These estimates vary based on how questions are asked, including the alternatives provided to respondents in the survey question).

Gallup's June estimate that about 20% of Americans have not been vaccinated and are unlikely to get vaccinated in the future is in the middle of that range (new Gallup data from July, to be released next week, show little change from this estimate).

What's Next to Reduce Vaccine Hesitancy?

Efforts to increase vaccination rates thus need to focus on practical nudges to those in the first group and the challenge of addressing the objections of the more intractable group of those who remain firmly opposed.

It's possible that some in the hard-core group opposing vaccination will move off their recalcitrant positions in the future. The Kaiser Family Foundation survey included follow-up interviews with those initially interviewed in January and found that 24% of those who said then they would not get the vaccine or would only get it if required had been vaccinated when recontacted in June. This suggests the 15-25% estimates of the hard-core group of "never vaxxers" may be a figure that shrinks some going forward (Well over nine in 10 of those who said they would get vaccinated in Kaiser's January survey had been vaccinated by June or said they were about to get vaccinated).

A great deal of research has focused on what might work best to increase vaccination rates among the resistant group, but my reading of the resulting literature indicates no agreement on a universally effective solution.

One of the most, if not the most significant, correlates of vaccine hesitancy is partisanship. Republicans are much less likely to report getting or intending to get the vaccine than independents and Democrats. My colleague Jeff Jones' recent update finds 46% of Republicans saying they would not get the vaccine, compared with 6% of Democrats and 31% of independents. All other surveys with which I am familiar find the same type of partisan response (This is not unexpected. Partisanship today is an underlying organizing factor that serves as a cognitive filter for a good deal of how Americans look at the world across a wide number of issues and policies).

Gallup data show that Republicans have particularly low confidence levels in major societal institutions that one might expect would be at the forefront of vaccine persuasion efforts -- including the government, science, the media and educational institutions. The data on science are particularly revealing, with 79% of Democrats saying they have a great deal or a lot of confidence in science, compared with 45% of Republicans. Similar partisan gaps emerge in confidence in news media, education and the federal government.

Another significant correlate of vaccine hesitancy is education. As Gallup noted, "Americans without a college degree are much more likely than college graduates to be vaccine-hesitant, 31% to 12%." We assume those with less formal education are less interested in or less accustomed to engaging in evidenced-based decision-making processes.

Biggest Concerns: Vaccine Side Effects and Lack of Trust

Research shows that the most frequently given reason for not getting the vaccine is worry about side effects -- coupled with a generalized lack of trust in vaccines. One might presume that providing information about the lack of serious side effects and the vaccine's efficacy would be directly useful in mitigating these objectives. But, as noted, fact-based arguments may not be effective when confronting people with low levels of confidence in the entities providing that information, who are less accustomed to scientific, rational thinking, and whose decision making may rely more on emotion and intuition than effortful mental activities and computations (Daniel Kahneman's System II thinking).

These findings all point to the conclusion that rational, information-laden campaigns propagated by major scientific, educational and governmental entities and channeled through the media may face significant challenges and, in the end, have limited success in modifying the behavior of the group of Americans who remain vaccine-hesitant.

So, what else might work? One significant possibility involves efforts at more direct behavior control, an approach that has not escaped the attention of those behind vaccination campaigns. A number of positive incentives have been utilized to increase vaccine uptake, including giveaways, lotteries and prizes. Additionally, the importance of the influence of friends and family, as reported by Kaiser, suggests a bounty program could be effective in which individuals get some type of monetary or other reinforcement for "referrals" to get people vaccinated.

Another important way to affect behavior is negative incentives -- mandates requiring vaccination proof to report for work or school or to travel without having to undergo constant testing. Republicans push back against mandates as unwarranted government control and intrusion into citizens' daily lives, but even with this generalized resistance, mandates could have the less obvious benefit of allowing vaccine hesitators to reduce cognitive dissonance. The use of mandates to explain why one gets vaccinated could provide a more cognitively consistent explanation (to oneself and others) for making that decision.

There is also the potential influence of religious leaders and religious organizations. Recent reports have noted the relationship between religious identity and vaccine hesitancy, as highlighted in the recent Wall Street Journal article, "White Evangelicals Resist Covid-19 Vaccine Most Among Religious Groups." The Public Religion Research Institute data on which this article was based looked at vaccine hesitancy across a number of different religious groups, showing that 24% of White Protestants who identify as evangelical say they won't get vaccinated compared with 6% of White Protestants who don't self-identify as evangelical or born again. The study notes that White evangelical Protestants are highly likely to be Republicans, which likely is the major underlying cause for this religious connection.

But even considering that partisanship is intertwined with religion in the U.S. today, it's likely that religion may play at least somewhat of an independent role in vaccine hesitancy. There are reports of evangelical ministers who call the pandemic a hoax and argue against vaccination from the pulpit, but other evangelical leaders support vaccination efforts. Well-known evangelical leader Franklin Graham, for example, publicly announced his vaccination and advocates that other fellow believers themselves get vaccinated. Other such efforts from religious leaders could be effective in reaching vaccine hesitators who have strong religious convictions.

These are quite general observations generated by a look at what public opinion is telling us about vaccine hesitancy, but they by no means constitute a comprehensive review. The more one looks into the literature on vaccine uptake -- including vaccine hesitancy work conducted internationally and conducted on vaccines prior to the COVID-19 era -- the more one realizes how extensive it is. But three conclusions appear to be justified. First, there is room for vaccine uptake improvement in the U.S. Second, vaccine hesitancy is deeply entrenched with the partisan differences in views of the world that control much of American social and political discourse these days. Third, efforts to control vaccine-related behavior through mandates may be more effective that attitudinal campaigns. 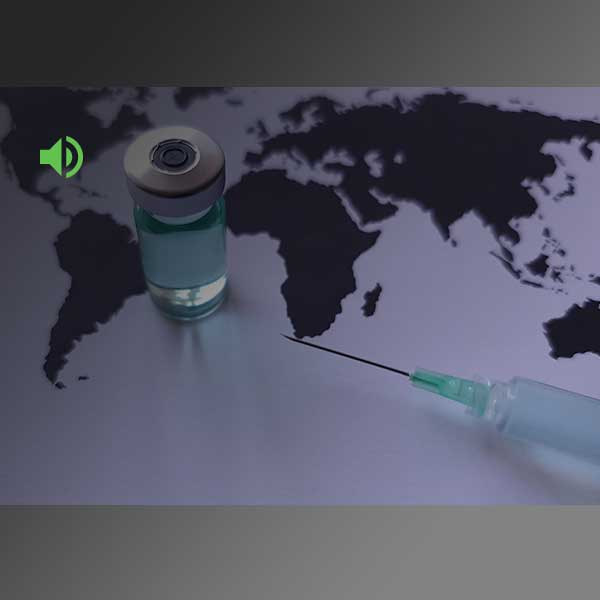 The Global State of Trust in Vaccines