WASHINGTON, D.C. -- Sixty-eight percent of Americans approve of labor unions. Though statistically similar to last year's 65%, the current reading is the highest Gallup has measured since 71% in 1965. 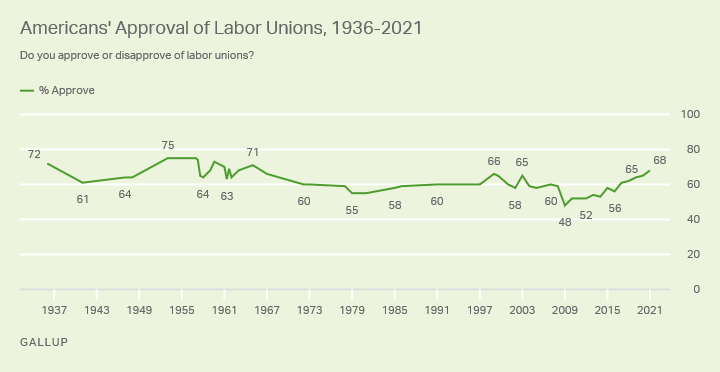 Gallup has measured the public's rating of labor unions periodically beginning in 1936 and then annually since 2001, and more Americans have expressed approval than disapproval in every reading.

The current results are from Gallup's annual Work and Education poll conducted Aug. 2-17, 2021.

Approval has increased among nearly all major demographic subgroups since 2016. One exception is labor union members, whose approval has been no lower than 75% since 2001. Currently, 86% of union members approve of unions, down from the recent high of 93% in 2019.

Democrats are the most approving of unions. Their latest approval of 90% is the highest it has been in the past two decades and is up seven points since last year. At the same time, Republicans' (47%) and independents' (66%) approval is essentially unchanged. Each partisan group's current approval of unions is more than 20 points higher than its lowest 2001-2020 rating. 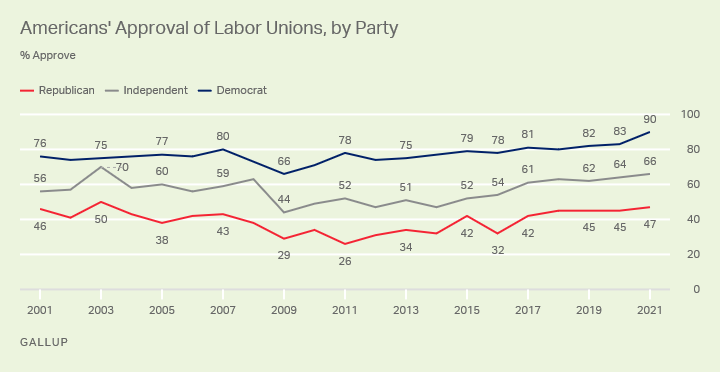 Line graph. Approval of labor unions since 2001 among U.S. partisans. Approval is currently 90% among Democrats, 66% among independents and 47% among Republicans. Democrats' approval is their highest recorded in the past 20 years.

It is not clear if the 90% union approval among Democrats is the highest measured because Gallup does not have a complete trend by party. However, it is higher now than it was in 1965, as well as when overall union approval was at its highest (1953). In those years, approval among Republicans was significantly greater than today. For their part, independents were at or above the current 66%.

At 9%, U.S. adults' self-reported membership in a labor union falls within the 7% to 12% range it has occupied over the past 20 years. Another 8% of Americans live in a household with a union member, meaning 17% of Americans reside in a union household.

Union members tend to have higher incomes than their nonunion counterparts -- about one in 10 Americans with household incomes of $40,000 or more are union members. This compares with 5% of those with incomes less than $40,000.

Americans' approval of labor unions has been trending upward in recent years and is now at its highest point in more than half a century. Approval among Democrats, which is nearly unanimous, has risen over the past year as President Joe Biden has said he expects his administration to be one of the most pro-union in history. However, with former President Donald Trump's appeal to many blue-collar workers, some Republican politicians have begun to support union issues.