WASHINGTON, D.C. -- Significantly fewer U.S. workers than a year ago are worried about a series of possible job setbacks, though more remain worried today than in 2019, before the coronavirus pandemic. This includes concerns about being laid off (18%), having work hours cut (20%), or having pay (23%) or benefits (27%) reduced.

These results are from Gallup's annual Work and Education survey, conducted Aug. 2-17.

In addition to the rise in worry last year amid the pandemic, an elevated percentage of workers were worried between 2009 and 2013, when unemployment was high and the recovery from the Great Recession was sluggish. The peaks in concern about layoffs (31%) and benefits cuts (46%) occurred in 2009, while the other areas of concern hit their high points in 2011. 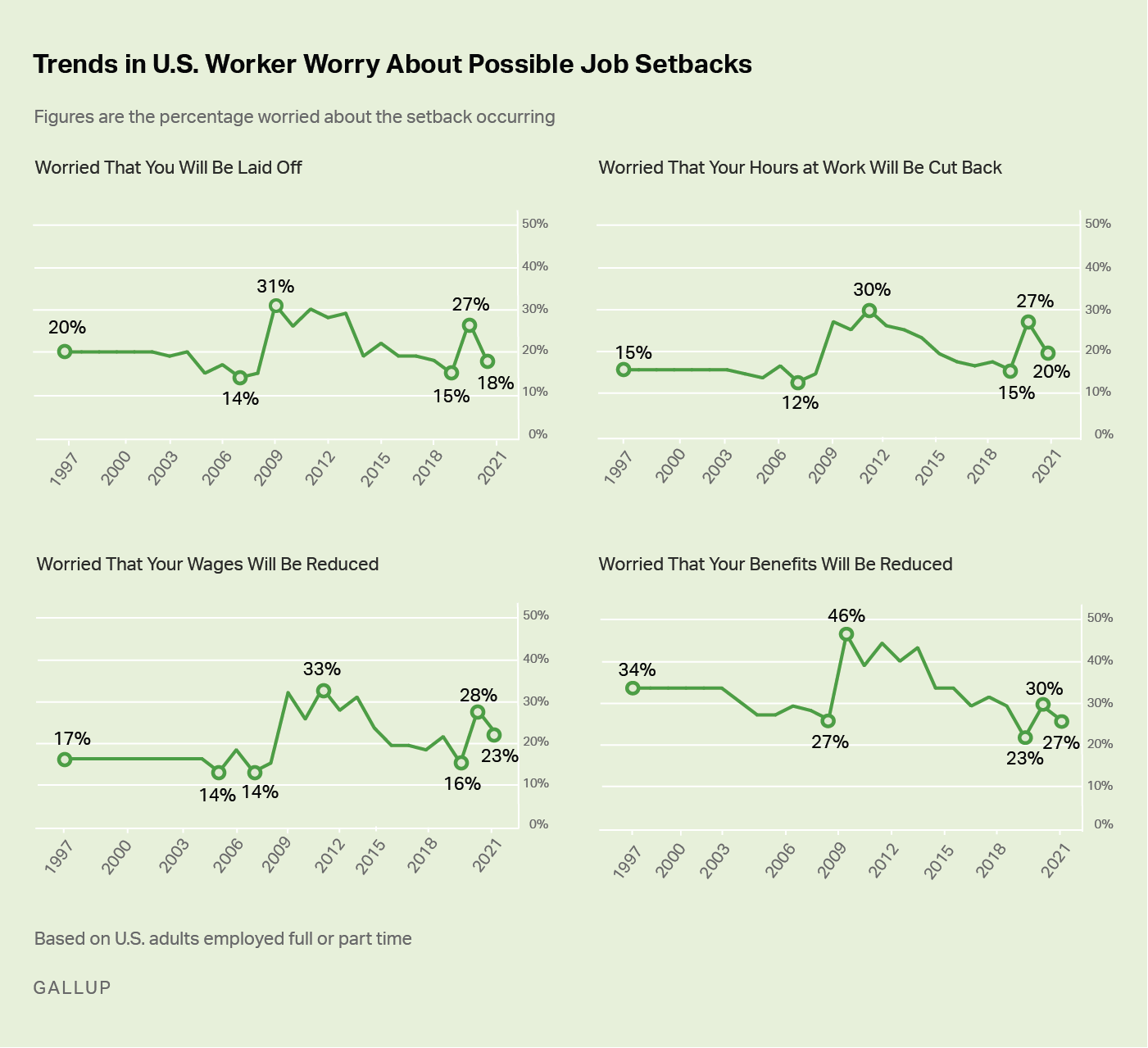 Series of line graphs showing trends in the percentage of U.S. workers who are worried about being laid off, having their work hours cut back, having their wages reduced or having their benefits reduced. Worry about all of these possible job setbacks was relatively low before the Great Recession, when it spiked. Worry began to recede in 2014 and was at or near low points in 2019, before spiking in 2020, and receding this year, but not back to 2019 levels.

Worry About Job Loss Due to Technology, Offshoring Relatively Muted

The poll also finds that 15% of U.S. workers say they are worried about their job becoming obsolete because of advances in technology, while 11% worry about their company moving jobs to countries overseas.

Gallup did not ask these items in the 2020 survey but has asked them in other years. The figures have not varied much over time, with an average of 15% since 2017 worried about technology making their job obsolete, and an average of 10% since 2003 worried about their company moving jobs to a different country.

Worry about all six job setbacks measured in the survey is higher among workers without a college degree than among those with one. Non-White workers are also more inclined than White workers to express worry. Younger workers are more likely than older workers to worry about having their hours cut or their benefits reduced, while there are no meaningful age differences on the other items.

Working men and women generally exhibit similar levels of worry on each item.

American workers are less worried about a variety of adverse job outcomes than they were last year, but they are still more worried than before the pandemic shook the economy. While the unemployment rate remains higher than it was before the pandemic, it has come down from the spring of 2020 when many businesses were shut down. The jobs recovery has been uneven, with weaker job growth in August after strong months in June and July.

The job market is currently more favorable to workers than employers, with many employers struggling to fill job vacancies. Notably, there are more job vacancies available than there are unemployed workers. The next few months will be telling for the job market as enhanced federal unemployment benefits expired on Monday, which may force reluctant workers back into the job market. However, the cutoff in benefits comes at a time when COVID-19 cases are high and the risk of infection may cause workers to stay home even if it means trying to live off less unemployment compensation.

Results for this Gallup poll are based on telephone interviews conducted Aug. 2-17, 2021, with a random sample of 1,006 adults, aged 18 and older, living in all 50 U.S. states and the District of Columbia. For results based on the total sample of national adults, the margin of sampling error is ±4 percentage points at the 95% confidence level.

For results based on the total sample of 506 adults who are full- or part-time employees, the margin of sampling error is ±5 percentage points at the 95% confidence level. All reported margins of sampling error include computed design effects for weighting.