WASHINGTON, D.C. -- Americans' satisfaction with the way things are going in the U.S. has fallen to 23%, the lowest point since President Joe Biden took office. This marks a seven-percentage-point decline from July. At the same time, mentions of COVID-19 as the nation's most important problem have more than doubled, to 26%.

The Aug. 2-17 Gallup poll was largely conducted prior to the collapse of the Afghan government and the Taliban's return to power, therefore curbing any potential effect that might have had on Americans' views. However, throughout the poll's field period, the U.S. continued to see a strong resurgence of the coronavirus pandemic due to the highly transmissible delta variant. By the end of the poll, many hospitals in the U.S. were at or near capacity -- as they had been at the height of the pandemic last winter -- and Americans were increasingly concerned.

At the start of 2021, when coronavirus infections and deaths peaked and citizens stormed the U.S. Capitol attempting to prevent Congress from certifying Biden's 2020 election victory, satisfaction with the direction of the U.S. fell to 11%, the lowest point in a decade. In the ensuing months, as the coronavirus situation improved amid the nationwide vaccine rollout, satisfaction rose steadily until it reached 36% in May and remained at 35% in June. Since then, however, satisfaction has fallen in two consecutive readings -- first by five points in July and then seven points further in the latest measure. 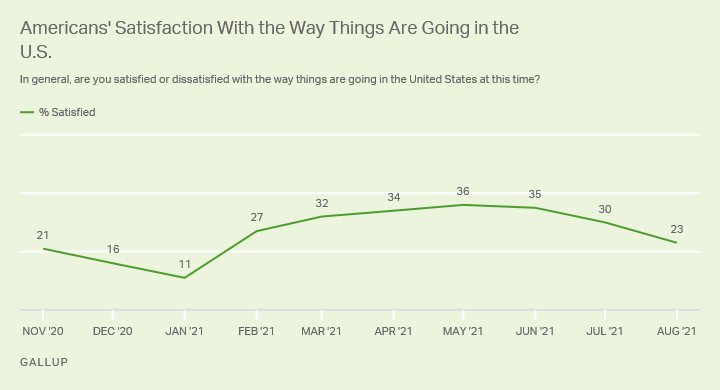 Line graph. Satisfaction with the direction of the U.S. among Americans since November 2020. The latest 23% satisfaction rating on the metric is down from a high of 36% in May. 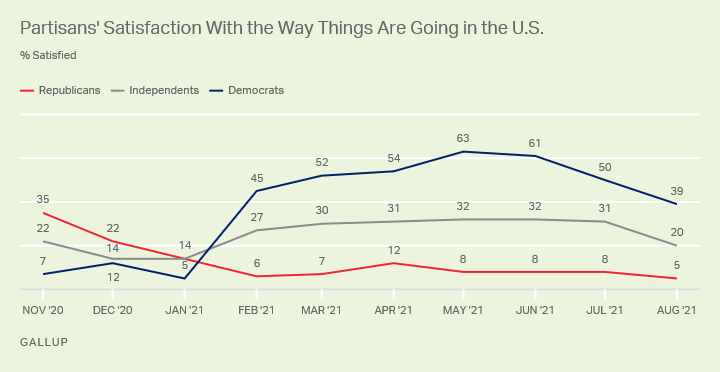 Line graph. Satisfaction with the direction of the U.S. among partisans since November 2020. Currently, 39% of Democrats, 20% of independents and 5% of Republicans are satisfied. Democrats' satisfaction is down from 63% in May while Republicans' has been consistently in single digits since May.

Two months ago, amid positive news about the state of the pandemic in the U.S. and optimism about the future, COVID-19 had fallen to its lowest point (8%) since the beginning of the pandemic. By July, with cases on the rise and concerns about the delta variant growing, 12% of U.S. adults named COVID-19 as the nation's top problem. Since then, COVID-19 mentions have risen 14 points to today's 26%.

Line graph. Percentage of Americans mentioning the coronavirus as the most important problem facing the U.S. since March 2020. Currently, 26% mention COVID-19 which is more than double the July reading and triple what it was in June. The 45% high was in April 2020.

The government (16%), immigration (11%) and the economy in general terms (8%) are currently the next most pressing issues, and they are statistically unchanged from last month. Race relations, which was named by 9% of Americans in July, is down five points in the latest reading.

Partisans' perceptions of the problems facing the nation continue to diverge. While Democrats and independents cite COVID-19 more than any other issue, Democrats are far more likely to do so -- 41% vs. 24%, respectively. Both groups are more than twice as likely as they were in July to name the pandemic.

Republicans' mentions of COVID-19 are lower (12%) and essentially unchanged from last month. Instead, the government (24%) and immigration (23%) are their top issues. While the percentage of Republicans citing the government now is statistically similar to July, immigration ticked up eight points as the Biden administration continues to grapple with large numbers of migrants at the southern U.S. border.

The economy and race relations are currently not named by more than 10% of any party group.

Not long ago, Americans largely thought the worst of the pandemic was behind them, and they were more satisfied with the direction of the country than they had been at any time since March 2020 when the pandemic began. Now, as the delta variant continues to spread and COVID-19 cases are surging, Americans' satisfaction has declined.

Biden's honeymoon is over, and as he continues to respond to the pandemic, he is also facing the first foreign policy crisis of his presidency. As long as these challenges continue and Democrats and some independents are concerned, satisfaction is likely to remain low.

Joe Biden's latest job approval rating is 49%, from a poll mostly conducted before the Taliban took control of Afghanistan.