WASHINGTON, D.C. -- The coronavirus continues to dominate Americans' top-of-mind mentions of what constitutes the most urgent health problem facing the country today, but to a lesser extent than a year ago.

In a Gallup poll conducted Nov. 1-16, 47% of U.S. adults named viruses as the country's top health problem, with the vast majority of these (45%) mentioning COVID-19 or the coronavirus, specifically. In November 2020, 69% saw viruses as the top threat, including 67% citing COVID-19.

The latest data were collected before the omicron variant of the virus triggered new travel restrictions, as well as a stock market sell-off on Friday.

Gallup first asked Americans in 1987 to name what they consider to be the nation's most urgent U.S. health problem and has updated it every year but one since 1999.

As mentions of the coronavirus have declined over the past year, the percentages citing healthcare access and cost have increased, although neither has returned to its pre-pandemic level. Gallup's latest reading of this question prior to the pandemic was conducted in November 2018.

Additionally, immunization is cited by 6% of all U.S. adults as the most urgent health problem. It is a bipartisan concern, mentioned by 7% of Republicans and 6% of Democrats, but for different reasons. Most Republicans citing vaccinations reference vaccine mandates and "forcing people to take the vaccination," while Democrats are concerned about vaccine hesitancy and the failure to get everyone vaccinated.

Mentions of COVID-19 Shrink Most Among Democrats and Independents

The decline in those naming COVID-19 or viruses generally as the nation's top health problem has occurred across society, seen about equally among men, women and all age groups. It has also declined among all major political party groups -- although more sharply among Democrats and independents, who were far more likely to name it last year, than among Republicans.

Only one illness besides COVID-19 has ever ranked as Americans' top concern about health problems facing the country. That was AIDS, named by 62% in Gallup's inaugural asking of this measure in 1987.

The illness caused by the human immunodeficiency virus (HIV) continued to top the list through the 1990s until improved public awareness, prevention and treatment helped public concern abate after 2000. At that point, mentions of healthcare costs and access increased and consistently ranked as the top two concerns until COVID-19 displaced them in 2020. 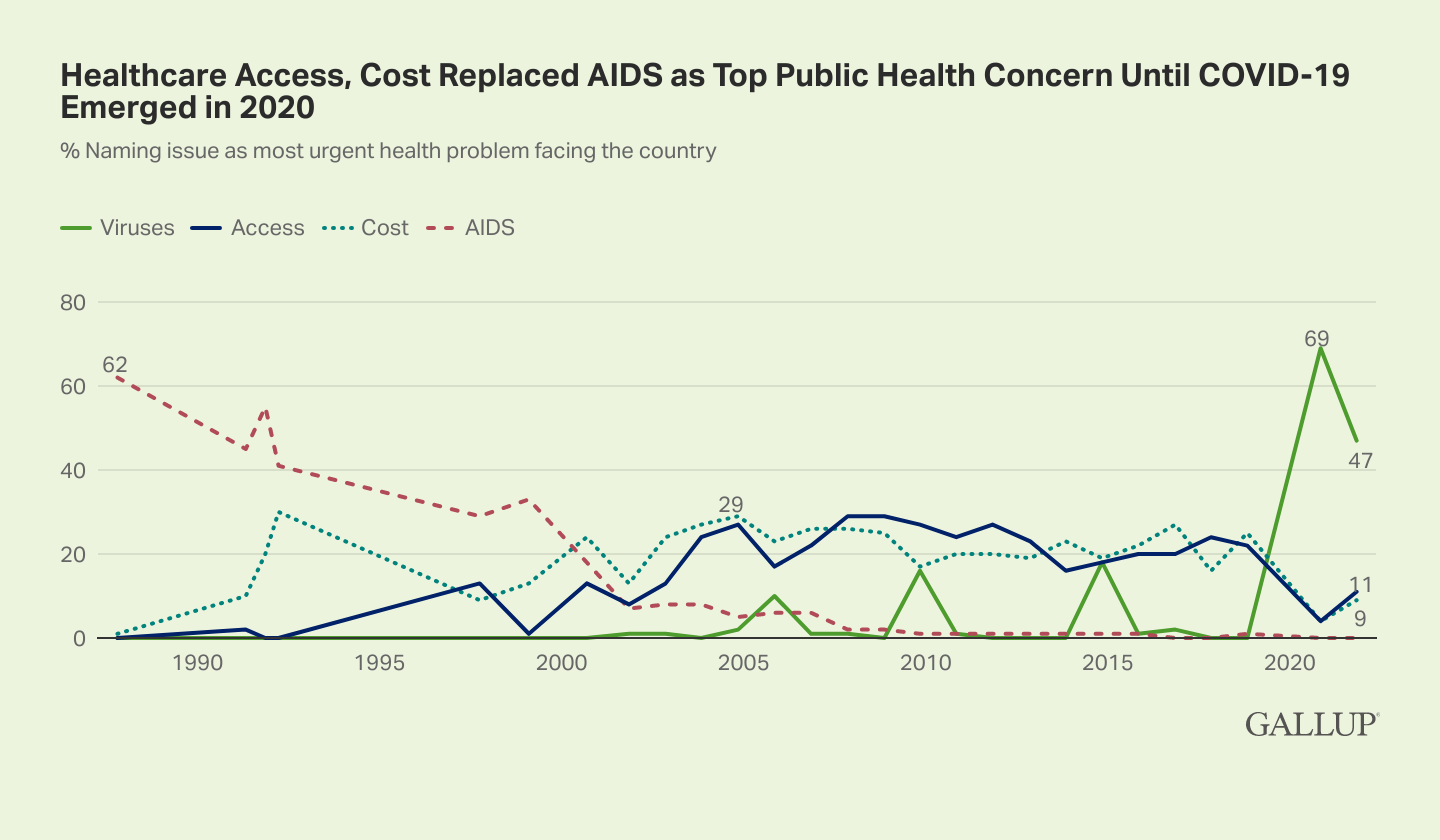 Line graph. Trend from 1987 to 2021 in percentages of Americans naming various issues as the most urgent health problem facing the country. Mentions of AIDS topped the list in 1987 at 62% before slowly dwindling to less than 10% by 2001. Mentions of healthcare access and costs emerged as the top ranking issues in 2003, named by about a quarter of Americans. Mentions of these issues remained high until 2020 when COVID-19 emerged, garnering 69%. That has fallen to 47% in 2021. Other viruses, over the years, garnered no more than 18%.

Belief that cancer was the most urgent health problem was relatively widespread in the late 1990s and early 2000s, reaching a high of 23%in 1999, but it never ranked as the top concern and has since declined.

Even before the omicron variant emerged as a potential threat to recent progress in the nation's recovery from the pandemic, COVID-19 was still Americans' primary health concern.

Only AIDS in the late 1980s and early 1990s received a higher percentage of mentions than COVID-19 does today. Whether concern about the virus plummets further next year or trails off slowly, as concern about AIDS did in the 1990s, may depend on how effective vaccines and medical treatments are at keeping up with new variants and allowing the country, if not the world, to return to its pre-pandemic normal.

A steady 74% of U.S. adults reported being vaccinated against COVID-19 in October. Meanwhile, younger teens appear to be catching up with older teens in getting the shots. 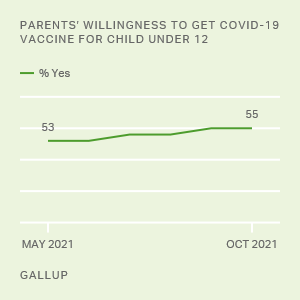 A steady 55% of U.S. parents of children under 12 say they would get their child vaccinated against COVID-19.