WASHINGTON, D.C. -- French President Emmanuel Macron on Sunday will attempt to do what no French incumbent president has been able to do in 20 years -- get reelected.

Gallup surveys in France showed Macron potentially headed into a close race, with approval ratings mostly on par with those during his first full year in office: Nearly half (48%) of French adults surveyed in 2021 said they approved of Macron's job performance, which is similar to the 49% rating they gave him in 2018. 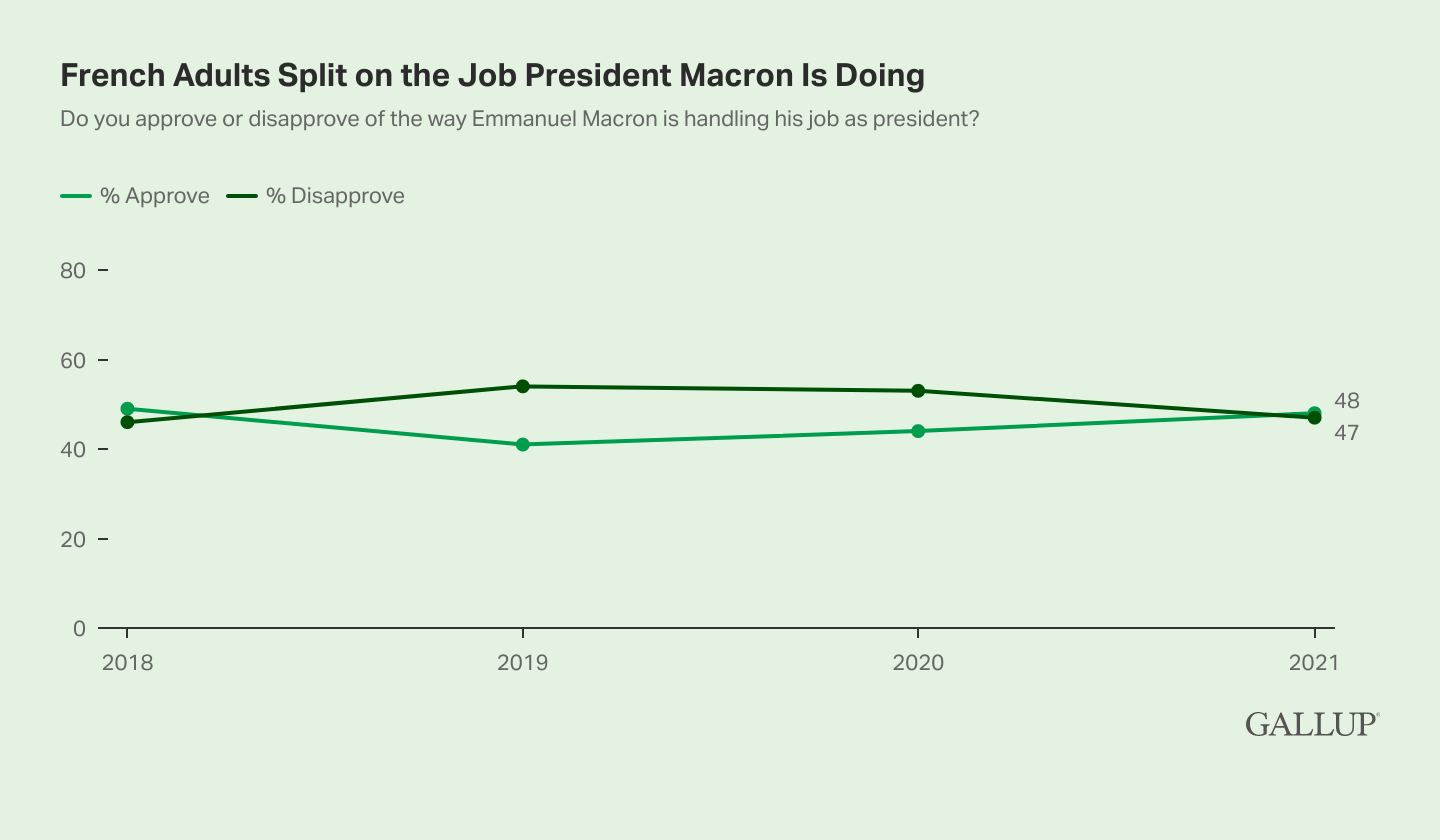 The volatility in Macron's ratings between his first full year in office and potentially his last shows his first term has not gone smoothly: Macron has faced a litany of crises, from the yellow vest protest movement to the country's longest transportation strike in decades, to the COVID-19 pandemic, and now, to the war in Ukraine.

Still, Gallup's data in 2021 showed Macron has been able to bridge some of the gaps in support that have plagued most of his presidency. Last year, for the first time, the majority of the poorest 20% (53%) and the richest 20% (51%) approved of Macron's job performance. Macron's ratings were also up among the youngest adult members of French society, with 55% of 15- to 29-year-olds approving, up from 49% in 2018.

Macron's rebound in 2021 can be partly explained by the slew of socioeconomic and health measures he pushed to counter the effects of the pandemic, which forced him to put the brakes on his deregulatory agenda. Early in the pandemic, France offered subsidies to employers to keep furloughed workers on the payroll, facilitating their return to work once vaccines became available.

Macron had often channeled his youth and energy during his first campaign, going so far as to label himself "the president of young people." Support of older voters hasn't been as steady. At the start of the pandemic, Macron -- embattled in myriad crises -- was in trouble with middle-aged voters. But the government's response to the pandemic likely provided a boost to Macron's approval.

In any election, one of the key questions voters ask is if their lives are better today than when the incumbents took office. Although Macron's approval ratings were up last year, French voters saw little difference in their daily lives and their prospects for the future. Slightly more than one in three (36%) French adults rated their lives highly enough to be considered thriving in 2021, which is essentially unchanged from the 35% who did so in 2018.

Gallup classifies individuals as "thriving," "struggling" or "suffering," according to how they rate their current and future lives on a ladder scale with steps numbered from 0 to 10, based on the Cantril Self-Anchoring Striving Scale. Those who rate their current life a 7 or higher and their anticipated life in five years an 8 or higher are classified as thriving.

Notably, the French are not alone in their "malaise" -- they belong to a group of Europeans with the most negative views about their lives, along with residents of Bulgaria, Poland, Italy, Spain, Portugal and Greece.

While Macron is likely to advance to a second round of voting on April 24, he faces a potentially close race dominated by bread-and-butter domestic concerns such as the cost of living and erosion of social protections.

He has already secured his place in France's history as a polarizing leader in a tumultuous time. Whether his reform agenda will be fully realized depends on his ability to make the case to voters that he cares about the same things they do.

Results for this Gallup poll are based on telephone interviews conducted May and June, 2021, with a random sample of 1,000 French adults aged 15 and older. For results based on the total sample of national adults, the margin of sampling error is ±3.9 percentage points at the 95% confidence level.

A Tale of Two Frances Before Riots

Ahead of the violent protests in France, President Emmanuel Macron's job approval was sinking among the very people who are now taking to the streets.

France Primed for Populist Wave Ahead of Election

Forty-three percent of French adults surveyed in 2016 lacked confidence in their national government and were less hopeful about the future than the present. This is the fourth-highest percentage among all EU countries.