Editor's Note: The research detailed below was conducted in partnership with West Health, a family of nonprofit and nonpartisan organizations focused on lowering healthcare costs to enable successful aging.

WASHINGTON, D.C. -- A plurality of Americans give the U.S. healthcare system overall a poor or failing grade, and majorities rate its affordability and equity the same way, according to the West Health-Gallup 2022 Healthcare in America Report. Access to healthcare and quality of care are regarded as somewhat better, though neither earns majority-level positive grades. 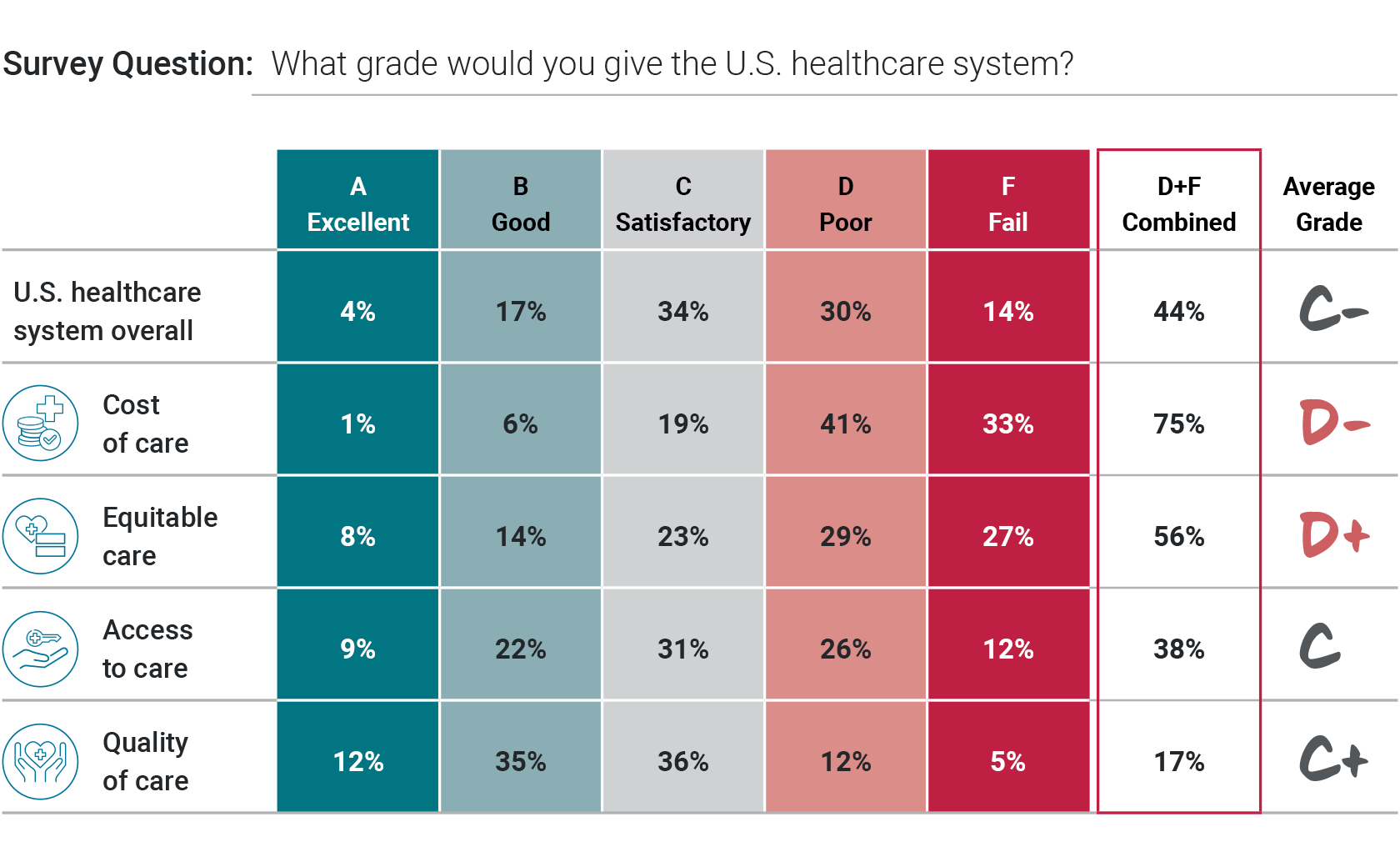 The survey was conducted by web from June 21-30, 2022, with more than 5,500 U.S. adults via the probability-based Gallup Panel. Full results can be found in the West Health-Gallup 2022 Healthcare in America Report, which explores the current struggles Americans face to pay for needed care and their concerns about the future of healthcare costs.

Assessments of healthcare affordability in America are consistently low, regardless of annual household income, as 72% to 78% of U.S. adults across all income groups assign D or F grades to it.

In a follow-up interview, one poll respondent, Deni Hagains Goss from Pennsylvania, explained her grade for healthcare's cost: "I [grade it an] F … I have preexisting illnesses. ... I have asthma. And the medication for that is just so astronomical. ... I pay a lot of copays. ... My general copay just to see a physician is [about] $40. Recently, I had an ultrasound of the heart ... and that was like $200 ... after my insurance coverage."

Ratings of Equity, Access and Quality Differ by Gender and Race/Ethnicity

While there is general agreement across demographic subgroups that the high cost of healthcare deserves a poor or failing grade, ratings on equity, access and quality differ by gender and race/ethnicity.

Americans Face Major Challenges, Consequences Due to Cost of Care

Just over one in four Americans (27%), an estimated 70 million adults, report that if they needed access to quality care today, they would not be able to afford it. This results in Americans continuing to make difficult tradeoffs when deciding to seek needed healthcare. Six in 10 adults report that cost is an "extremely important" (28%) or "important" (33%) consideration in whether they take their doctor's advice to pursue treatment, with women (66%) more likely than men (55%) to say so.

A sizable proportion skips care altogether just to pay for household needs, as one out of every six adults report cutting back on healthcare in the past year for this reason. This includes more than 20% of women and of Black and Hispanic adults.

Brandon Shaw from Minnesota explains his calculus this way: "Unless it's life-threatening -- life, limb or eyesight -- I don't want to incur those costs. I don't feel that the cost-to-benefit ratio [is] there to justify the expense."

As Americans Struggle to Pay for Care, They Face Serious Health Outcomes

The inability to afford treatment for their health conditions today leads to potentially further deterioration of Americans' current and future health. Nearly one in five adults (18%), an estimated 47 million Americans, report that their health problems worsened in the past year due to an inability to pay for treatment. Women and Hispanic Americans report worsening health outcomes at the highest rates.

This can have dire consequences. Five percent of U.S. adults -- an estimated 14 million people -- report that they had a friend or family member die because of an inability to pay for needed healthcare. Black and Hispanic Americans (9% each) are almost twice as likely as the general population to report the death of someone close due to healthcare costs. These results provide strong evidence of inequity in the healthcare system.

Looking ahead, Americans lack confidence in their own ability to pay for healthcare. Half of Americans are either not very or not at all confident that they will have the financial resources to pay for the healthcare they will require as they age, with women (55%) more likely than men (45%) to express this concern.

Diana Rael from New Mexico explains her concerns about paying for care in the future: "Especially as we age, [there] is the issue of long-term care. We're seeing that a lot. Personally, I have a family member that probably should be in a nursing home but can't afford it. So the family is having to take care of this person, and the impact is significant."

When asked what stands in the way of lowering healthcare costs in the United States, nearly eight in 10 Americans cite lobbying and partisan politics as a "major barrier" (79% each), and seven in 10 point to a lack of price regulation.

At the same time, majorities of adults -- across political parties -- support limits on how much people can be charged for healthcare, via federal government regulations.

Sharon Cook from New Jersey sees the issue as a political problem: "It doesn't seem as though it's that important to our congresspeople -- our representatives -- that we lower costs, that we make things accessible. I don't see any movement in that direction."

The West Health-Gallup 2022 Healthcare in America Report adds an important grading metric to assess key aspects of the U.S. healthcare system. It found millions of people, including higher rates of women and Black and Hispanic adults, are skipping treatment because they cannot afford it, and many are getting sicker or dying as a result. These consequences of a high-priced healthcare system have created concerns for the future. Most Americans express high levels of uncertainty and worry about paying for healthcare as they age.

Policymakers have begun to respond to this crisis. In August, President Joe Biden signed the Inflation Reduction Act of 2022 into law. Among its healthcare provisions, this landmark legislation allows Medicare for the first time to negotiate certain prescription drug prices with pharmaceutical companies. This is a significant step in reducing costs. However, the results of the negotiations do not take effect until 2026, are limited to 10 prescription drugs in that initial year and are for Medicare beneficiaries only.

This study, as part of a growing body of research from West Health and Gallup, shows that the problem of high healthcare costs is expansive and urgent, and it affects a sizable cross-section of Americans.

Samples are weighted to correct for unequal selection probability, nonresponse, and double coverage of landline and cell users in the two sampling frames. They are also weighted to match the national demographics of gender, age, race, Hispanic ethnicity, education, region, population density and phone status (cellphone only/landline only/both and cellphone mostly). Demographic weighting targets are based on the most recent Current Population Survey figures for the aged 18 and older U.S. population.