In a 1969 poll for Newsweek magazine, Gallup asked a nationwide sample of Black Americans to identify the terms they most and least liked as identifiers for their race. The answers were highly varied, with none of the four names preferred by the majority of Black Americans at the time.

Still, one term -- "Negroes" -- stood out for being significantly more liked than disliked. Another -- "colored people" -- was frowned on more than it was embraced, while "Blacks" and "Afro-Americans" drew mixed reviews.

The choices offered in 1969 were a reflection of the time.

The next time Gallup measured Black Americans' preferred racial self-descriptor was in 1991, with the options limited to "Black" or "African American," but also offering the alternative "or does it not matter to you either way?"

The 1991 poll was conducted two years after a group of Black leaders, including the Rev. Jesse Jackson, called for "African American" to be the standard. Jackson was quoted as saying, ''This is deeper than just name recognition," and ''Black tells you about skin color and what side of town you live on; African American evokes discussion of the world.''

In several Gallup measurements over the next three decades, including the most recent in 2019, the large majority of Black Americans have said the use of Black vs. African American doesn't matter to them. For most of this time, the rest have been closely split between the two, but from 2000 to 2007, "African American" had the slight edge. 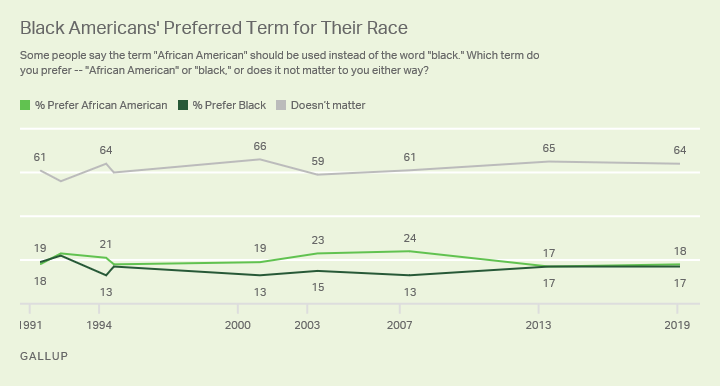 Line graph. Black Americans' preferred term for their race. In 2019, 64% of Black Americans said it did not matter to them if the term black or African American was used; among those with a preference, nearly equal numbers chose one or the other.

The 2019 results are based on combined data from five national telephone surveys conducted between February and May. Although these data show slight differences in various demographic and political subgroups' preferences for "African American" versus "Black," the dominant response among all groups is, "it does not matter."

Other polling organizations have asked a similar question about Black Americans' preferred name for their race, but without the "does not matter" response option. Most recently (according to data stored in the Roper Center polling archive), an NBC News/Wall Street Journal poll asked in 2011, "When someone refers to your race, do you prefer to be referred to as Black, African American, or do you prefer some other term?" On this basis, Black Americans were also about evenly split, with 42% preferring the term Black and 35%, African American; 7% said they prefer another term; 3% were unsure; and 13% volunteered that it doesn't make a difference.

Before he was killed, Martin Luther King Jr. declared the nation "sick," tying this to racism and violence. Nevertheless, 58% of Americans disagreed.

Congress has never made lynching a federal crime, but Americans have long supported the passage of such a bill.

The U.S. Supreme Court ruled 50 years ago that state laws against interracial marriage were unconstitutional. But as that case was wending its way through the courts, less than half of Americans agreed.