skip to main content
Business Journal
Consumers Are Still Wary. Here's How to Win Them.

The recession and its lasting effects on consumer behavior have devastated sales.

The financial collapse of 2008 and the ensuing Great Recession have changed American consumers in significant ways. These events have weakened their confidence in the U.S. economy, made them question the businesses where they spend money, and forced them to take a hard look at their own financial habits. Consumers are now more cautious and demanding. When once they used to spend, they now prefer to save. When once they were content to follow, they now want to lead.

Some businesses have struggled to adapt to consumers' shifting attitudes; the recession and its lasting effects on consumer behavior have devastated their sales. Others, though, have managed to succeed in this environment by building on a foundation of exceptional service. These businesses have created fully engaged customers, those sought-after brand ambassadors and true believers who not only go out of their way to purchase their preferred products and services, but who encourage others to do the same.

Gallup recently surveyed consumers about their current attitudes, and the results were just released in the company's State of the American Consumer report. What follows are key findings and insights that marketers can use immediately -- as well as advice on how to create those coveted fully engaged customers, even as consumers remain leery of spending.

Americans continue to worry about their financial security. Although still in negative territory, Gallup's Economic Confidence Index shows that American consumers are more confident in the U.S. economy now than they have been in the past six years. The Economic Confidence Index is the average of two components: Americans' views on the current economic situation and their perceptions of whether the economy is getting better or worse. The index averaged -16 for the first quarter of 2014, which was 32 points higher than the average for 2008.

Daily spending in the first quarter of 2014 reached an average of $84. While this showed an improvement over recent years, daily consumer spending still trails behind the 2008 average of $96.

The percentages of U.S. workers who said they were worried about job security or reductions in wages or benefits were nearly as high in 2013 as they were in 2009 and nearly double the levels in 2008.

Engagement can significantly improve the bottom line. Gallup research has found that customers who are fully engaged represent an average 23% premium in terms of share of wallet, profitability, revenue, and relationship growth over the average customer. In stark contrast, actively disengaged customers represent a 13% discount in those same measures.

Companies that engage their employees and their customers gain a 240% boost in performance-related business outcomes.

Retail banking customers who are fully engaged bring 37% more revenue per year to their primary bank compared with those who are actively disengaged.

Consumers and employees don't "get" brands. More than 90% of consumer electronics shoppers believe that all electronics retailers are the same and that no single retailer is the best.

The majority of consumers can successfully identify the core identity elements associated with just two out of six brands.

Less than half of managers (46%) and about one-third of non-management employees (37%) say they know what their company stands for and what makes it different from its competitors.

Service can make or break a relationship. Retail banking customers who feel they receive exceptional service are 29% more likely to be fully engaged than other customers.

Hotels guests are significantly more likely to be fully engaged when they feel like they have been treated as valued guests. However, in a recent Gallup hospitality study, the percentage of guests who said they actually felt valued was less than half.

The digital world is still taking shape. Just 5% of consumers who use social media say these channels have a great deal of influence on their purchasing decisions, while 62% say they have no influence at all. Gallup research has revealed that friends, in-store displays, television commercials, and even mail catalogs and magazines have more influence on consumers' purchasing decisions than social media does.

Online banking is a net destroyer of engagement. Banking customers who are satisfied with this channel are 7% more likely to be fully engaged than non-users. But when users are dissatisfied, their likelihood of being fully engaged drops by 14%.

Although many brick-and-mortar retailers see the Web as a threat, less than half of consumers have engaged in a practice known as "showrooming" -- examining merchandise in a brick-and-mortar store with the intention of purchasing the product for less online.

What companies can do to improve customer engagement

With all of these insights in mind, here is how companies struggling to compete in a wary-consumer marketplace can improve their customer engagement and even create sought-after fully engaged customers -- brand ambassadors and true believers:

Your Brand Is Your Company's Engine

Keeping a brand promise involves many moving parts, people, and processes. Get them revved up and heading in the right direction, and your business will race ahead of the competition. 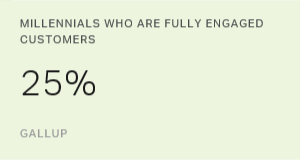 Millennials are the least-engaged generation of consumers. Brands are not delivering on this group's ideal customer experience.