WASHINGTON, D.C. -- Six percent of recent U.S. retail shoppers indicated they "showroomed" in early November -- meaning they examined merchandise in a traditional brick-and-mortar retail store, but made the purchase online instead. Another 3% say they intend to buy the merchandise online. In other words, brick-and-mortar stores may be losing nearly one customer in 10 to showrooming. 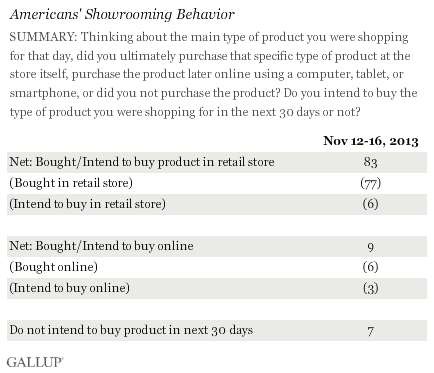 The measure is based on a nationally representative Gallup poll conducted in mid-November that asked respondents about their shopping behavior the week before.

A key reason showrooming happens is because online retailers -- who do not have the same overhead costs as brick-and-mortar stores -- frequently offer lower prices. Retailers have cited showrooming as being costly to their bottom line due to the loss of the sale. Media reports have suggested this recent phenomenon as a reason retailers have discontinued certain products.

It is possible that some of those who showroomed during a typical week did not do so intentionally; that is, they did not purposefully go into the store intending to purchase an item later online, but ended up doing so for various reasons. Therefore, the 6% who indicate that they made their purchase online after first shopping in the store includes those who intended to do this as they began shopping, as well as those who may not have initially intended to do it.

Overall, 40% of Americans Have Showroomed at Least Once

In addition to asking about their specific shopping behavior in the last week, Gallup asked about Americans' showrooming activity more generally. Forty percent say they have visited a retail store just to obtain information about a product with the specific intention of buying the product later online.

To counter the showrooming threat, many brick-and-mortar retailers have tried to compete with online retailers by slashing their own prices. But this assumes that price is the only factor customers consider when making a purchase.

Gallup research has shown that a brick-and-mortar store's level of customer engagement may play a significant role in driving the eventual sale of a product. A 2011 Gallup study of consumer electronics retailers shows that more than 90% of all consumer electronics customers in the United States believe that no single consumer electronics retailer is the best. For these retailers, showrooming is not the issue; it is employees failing to engage the shoppers once they are in the store. Results from the study show that "fully engaged" customers -- those with the strongest rational and emotional connections to a particular retailer -- spend more than others do. Fully engaged consumer electronics customers, according to the study, spent $373 on average during their previous visit, compared with an average $289 for "actively disengaged" customers -- those who have the weakest rational and emotional connections to the store.

Combating the trend of showrooming means retailers need employees who can engage customers and so must create conditions in which talented salespeople can thrive. This will produce more of the fully engaged customers retailers want. Also, if shoppers are not interested in purchasing at that moment, an engaged and properly trained retail employee may attempt to convince the customer to buy from that retailer's website, instead of a rival's site. This keeps the buying process centralized by allowing shoppers to browse in the store, buy from that store's website, and pick up the items at the store or have them delivered to their home.

Results for this Gallup poll are based on telephone interviews conducted Nov. 12-16, 2013, on the Gallup Daily tracking survey, with a random sample of 2,559 adults, aged 18 and older, living in all 50 U.S. states and the District of Columbia.

For results based on the sample of 1,452 national adults who shopped in a retail store in the past seven days, the margin of sampling error is ±3 percentage points.