Over the past decade, the lens through which customers view their bank and through which banks view their customers has shifted considerably. What once was a channel-dominant view of the customer ("Suzie uses the branch most often, so let's make sure her branch experience is stellar.") shifted to a more complex multichannel view ("Suzie interacts with us across many channels, how can we make the various experiences seamless?"), and then to the current focus on enabling a true omnichannel experience ("We need to engage Suzie positively wherever she is, whenever that is, by whatever communication methods she is using.").

In reality, most sizable retail banks operate somewhere between the channel-dominant and multichannel arenas, with many back-office and customer-facing functions still housed primarily within specific channel, segment, or product silos. It is within this context that we often get asked, "Which channel is most important in driving customer engagement?" Of course, quite often the real, though unsatisfying, answer is "it depends" -- on the customer, on the product, and on the situation. And if banks truly achieve an omnichannel customer posture, the question itself will become moot. Until then, however, it can be useful for banks to think about how their performance in each channel contributes to their overall customer engagement profile -- both currently and how that might change in the foreseeable future.

Customer engagement is certainly a worthy outcome metric to drive -- fully engaged customers generate significantly more product penetration, revenue, and wallet share than indifferent or actively disengaged customers. Given that resources, time, and focus are limited, knowing which channels generate the greatest impact on customer engagement can help banks prioritize their efforts. Deciphering current overall "impact" involves weighing three factors: 1) how effective a given channel interaction is for customers who use it, 2) how satisfied those customers are with that channel, and 3) how many customers overall use that particular channel. We recently noted how "BRATMO" (branch, ATM, and online) remained the dominant channel usage troika, with nearly half (46%) of customers using that combination in the past six months. The fact that so many customers use those channels gives them a leg up in terms of overall impact on customer engagement. However, based on recent modeling from our 2013 Retail Banking study, it may well be that as customers increasingly interact with their bank through mobile and social channels, these channels will contribute more and more to the bank's overall level of customer engagement. 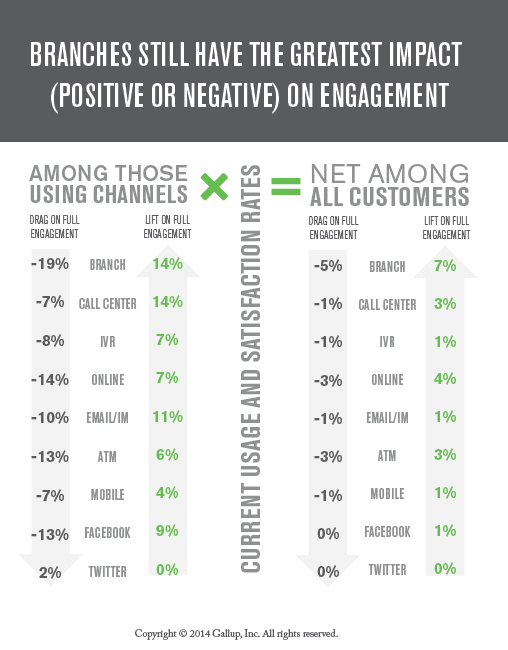 Branches Top Net Engagement Driver: As depicted above, when a branch user is "extremely satisfied" with their most recent visit, their probability of being a fully engaged customer increases by 14% compared with a customer who doesn't use the branch (and also controlling for all of the other channel experiences that customer had with their bank). Conversely, when that branch experience is anything less than extremely satisfying, the customer's probability of being fully engaged is actually 19% less than those who don't use the branch at all. When usage (not everyone uses the branch) and actual performance (more positive than negative experiences) are factored in, the final net "lift" in engagement due to positive branch experiences is 7%, while the final net "drag" on engagement due to negative branch experiences is -5% -- meaning that branches are a net positive for engagement across the industry. The overall spread (impact) of 12 percentage points (+7% lift, -5% drag) is also the highest for any channel.

ATM, Online Also Important: When customers are extremely satisfied with their ATM and online banking experiences they are 6-7% more likely to be fully engaged than customers who are not using those channels, while less-than-satisfying experiences prove more costly, reducing the likelihood of full engagement by 13-14%. Because more experiences are positive than negative, the net impact on engagement for both channels is split roughly equally between lift (3-4%) and drag (-3%). While less than the 12-percentage-point overall "spread" impact of branches, ATM and online interactions represent a net impact of 6-7% on engagement -- a strong second to branches.

As Mobile Grows, So Will Impact: Satisfaction with the mobile banking experience does impact the customer's overall engagement with the bank, although to a lesser degree than most other channels. With fewer users than more established channels, the net effect on engagement is modest -- a lift of 1% among extremely satisfied users and a drag of 1% among those not satisfied with the experience. However, these engagement effects are likely to grow in the future as banks' mobile offerings become more differentiated in terms of functionality, usability, and financial integration (for example, with payment systems or mobile wallets), and more customers continue to adopt mobile banking.

Facebook Meaningful for Users, Twitter Not Yet on Engagement Radar: Among customers who have communicated with their bank on Facebook, satisfaction with that interaction has a meaningful impact on engagement -- both positive (9% lift) and negative (-13% drag). In fact, among current users, the impact is on par with call centers, online banking, email, and ATMs. Most of this impact gets washed out across the entire customer base, due to the relatively low number of Facebook interactions. As is the case with mobile, to the extent that Facebook interactions between customers and their banks increase over time, the net impact on overall engagement should increase as well. These results suggest an important warning for banks -- merely setting up a Facebook account without working to engage followers with meaningful content and timely feedback will actually erode customer engagement. Twitter, however, appears to be more of a novelty with customers -- there is little impact on engagement, even among those who tweet with their bank.

With the exception of Twitter, all of the channels that we tested in our study have a meaningful impact on customer engagement. When customers have a satisfying experience with the channel, they are more likely to be fully engaged with the bank overall, and when they have a less-than-satisfying experience, they are far less likely to be fully engaged. Higher current usage patterns give the BRATMO channels the greatest net impact on customer engagement, but shifting usage (and potentially satisfaction) patterns in the future are likely to change these engagement dynamics. Banks that lack focus on their mobile and social channels, while seemingly a reasonable strategy from a current usage perspective, do so at their own risk. As more transaction and conversation traffic flows through the mobile handset and is moderated by social networks, we may indeed arrive at an omnichannel world sooner than later.

To learn more about how to increase customer engagement and growth, visit the Financial Services area on this site.