As millions of students and educators count down the days until summer, they often take time to reflect on the past school year and celebrate accomplishments. Taking time to acknowledge big achievements is important, but recognition shouldn't just be part of a routine sendoff at the end of a successful school year -- it should be a way of everyday life.

Unfortunately, most schools and workplaces struggle to deliver adequate recognition. Gallup has asked more than 25 million employees around the world -- including more than 100,000 educators -- about what makes them engaged at work. K-12 teachers rate one item lower than any other on the survey: "In the last seven days, I have received recognition or praise for doing good work." Just 29% of teachers in Gallup's employee engagement database say they "strongly agree" with this statement.

This low percentage is alarming because beliefs and actions related to recognition are key drivers of what makes some principals more successful than others in the eyes of teachers. In a recent study of principals, Gallup asked teachers to rate their principal on a wide range of measures including management style, philosophy and school climate. Principals with the highest level of talent elicited a very different set of responses from their teachers. These great principals:

Some principals stand out for their effectiveness in building a culture of recognition -- but what about the rest? How can everyone else better meet this important standard for a successful workplace? The answer is embedded within this statement: "In the last seven days, I have received recognition or praise for doing good work."

Giving recognition does not come naturally to everyone. Some of us need more tools, resources and partnerships to ensure that it is done well. Research shows that great principals create great workplaces for their teams and that recognition is a key driver of great workplaces. Further, teachers value principals who create a culture of recognition above almost any other issue.

As principals, teachers and students enjoy this season of celebrating the accomplishments of another school year, let's commit to finding more ways to build more recognition into our schools and workplaces. 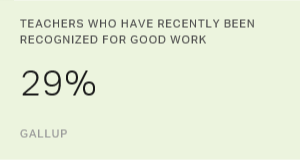 Why Appreciating Teachers Is More Important Than You Think

On the eve of National Teacher Day, few teachers say they have received recent praise and recognition -- a problem that persists but can be fixed.